Boardwalk Empire’s second season was faster paced than much of the first, possibly in response to “Boredwalk” criticism. While there were memorable moments throughout the season, no episode stood out for consistent quality until the final two chapters.

The raging wannabe history geek in me laughed at the season opener’s awkward inclusion of machine gun-toting KKK members. Yet the way that various plots spun out from this scene was admirable, with protagonists Nucky Thompson (Buscemi) and James Darmody (Pitt) already on the move to contain and exploit the situation. This momentum was welcome, propelling us through the plots.

Many episodes contain grandly orchestrated opening montages and closing punches — a timely protest is the most striking of many parallels comparing 1921 to 2011. However, too much time is spent with interchangeable investors and middlemen. For every scene of brilliance there is another of people delivering threats instead of action. Sickness, a suicide attempt, and a shocking death towards season’s end add dramatic impact, but hint at overbearing narrative hands.

Period drama tedium, dialogue that aspires to profundity, and lingering derivative whispers are weaknesses carried from the first season. Viewers’ emotions are repeatedly nudged when the show’s subtler, graceful touches are best. 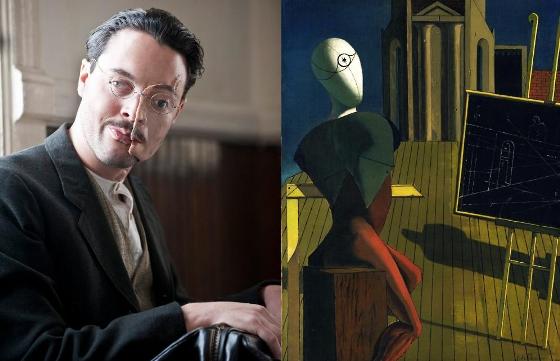 Along with gorgeous production and cinematography, Boardwalk’s power lay in its characters. Everything from the writing to wardrobe to the performances supplies them with fine distinguishing details. Even when dealing with family problems and underworld machinations, Nucky has some of the wittiest lines and gestures, including one fist pump-worthy moment with a lobster.

Signature character Richard Harrow (Huston), whose face mask prompts many a metaphor, is a carefully balanced blend of sensitivity and detached deadliness. Though one episode’s wallow through misery felt somewhat forced, there are several excellent moments for Harrow. For example, it is in a quiet moment with Angela Darmody (Palladino) — who deserved more screen time — that his sympathy with Giorgio de Chirico’s works (The Seer, 1914-15, above) is mentioned. It’s a quick, casual reference inextricable from the era, but the poignant undercurrent of the scene is accessible to viewers of any time.

Carefully crafted personality traits anchor our interest. We have Gillian Darmody (Gretchen Mol) whose twisted rage and drive are fascinating. Margaret Schroeder (Macdonald) undergoes an emotional whirlwind but emerges with a gaze like a loaded gun. There is Chalky White (Michael Kenneth Williams) who finds that his criminal and community leader roles will clash.

Then there is Esther Randolph (Julianne Nicholson), a smart-tongued prosecutor determined to pursue justice. The scheming from Arnold Rothstein (Sthulbarg), Lucky Luciano (Vincent Piazza), Meyer Lansky (Anatol Yusef) and Al Capone (Stephen Graham) is always entertaining, though by the end, they only get to display routine intimidation. Eli Thompson (Whigham) and Season one’s floozy, Lucy (Paz de la Huerta), gain surprising layers, and “The Butcher” Manny Horvitz (William Forsythe) is an unforgettable presence. Conservative G-man Nelson Van Alden (Shannon) has an engaging arc as he hides from his sins.

By the finale, Nucky has completed his journey towards becoming more than “half a gangster.” Other characters also find their lives permanently changed.

Are some characters’ fates predictable or simply inevitable? Watch this second season and decide.