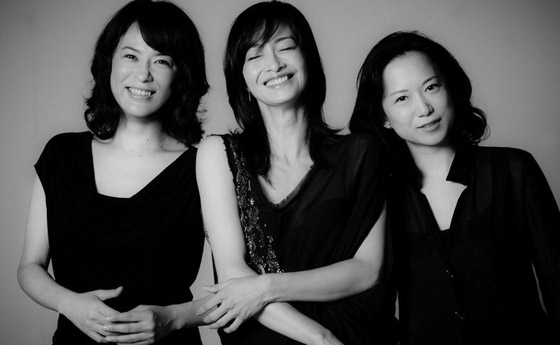 I have to be honest here. I was duped into watching this with the synopsis, which stated:

Bitter Sugar tells the story of three women who are all nearing the age of 40. An incident then damages their friendship and leads them to open up about their true feelings …

Of course, there’s also Ryo… whom you may or not know from that dark dramedy film, Welcome to the Quiet Room, in which Ryo played that very cold and calculative nurse that got things done. Her role wasn’t pivotal to the plot of that film, but her only important scene got burnt into my subconscious because of how darkly hilarious it was.

There was also Shugo Oshinari, whom, I’ve gotta admit, I found slightly appealing in Don’t Laugh at my Romance, and completely freaked me out in Shunji Iwai’s All About Lily Chou Chou. Then there was Hitomi Yaida’s ending theme titled Diary Full of Mistakes (間違いだらけのダイアリー) [clip].

So all these elements, as well as the availability of the 30-minute show on NHK, made it easy to at least check it out. The thing was that Bitter Sugar was nothing like I expected.

The show tells the story of three women nearing their 40s who grew up best friends and happened to have their birthdays all in the same week — as if they were born to be friends. First, there’s Ichiko (Ryo), a screenwriter who’s on the road to penning her debut book about life entitled Bitter Sugar after her boyfriend of seven years, Kotaro (Yoshihiko Hakamada), leaves her.

Then there’s Mari (Emi Wakui), who is in a relationship with a younger man named Asahi (Oshinari), who happens to be the kind of boytoy that attracts Mari’s boss and the girls’ gay friend, Takumi (Kosuke Toyohara). Then there’s Natsu (Sawa Suzuki), the only one of the girls who got married and started a family.

Things get complicated when Natsu’s husband goes missing, leaving a letter to her and his daughter saying his life is not satisfying him. While Natsu dumps her daughter, Mizuki (Chika Arakawa), at Ichiko’s place to go look for her husband, everyone suspects that he has eloped with another woman. Things get more complicated. When Mari dumps her boytoy and Takumi makes a move on him, Ichiko runs into her ex.

Whatever Ichiko wanted — perhaps to savor the sweetness of love without the bitterness of it — just isn’t possible, mainly because this is a show and we need the drama. Unfortunately, Bitter Sugar lacks the ability to enjoy a broader appeal because it is solely focused on relationships. If other issues come up we’re never going to see them because we worry about what Ichiko is going to do about her ex, if Mari is going to ever move on from boytoys, or if Natsu is ever going to find — and eventually forgive — her husband.

If you are going to get all telenovela-like, you better give in all the way. But then again, I never expected NHK to do telenovela productions.