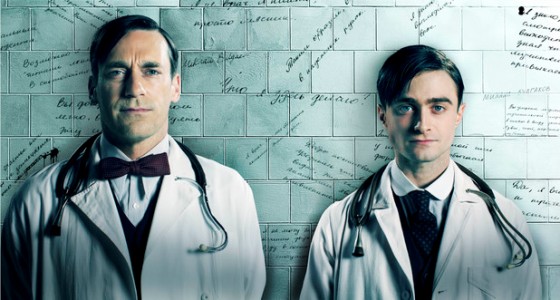 We have already seen Daniel Radcliffe having a stab at the horror genre with The Woman in Black, but how does the Harry Potter star fare in the comedy genre? If you want to know the answer to that, check out Sky’s 4-episode miniseries A Young Doctor’s Notebook, which is based on the Russian book A Country Doctor’s Notebook by Mikhail Bulgakov, starring Radcliffe as a young inexperienced doctor who has been sent to work at a small hospital in a Russian village located in the middle of nowhere.

As we get to see how the young doctor’s stay at the hospital goes, he also gets to see (and get aided by) his older version (Jon Hamm) from the future. And from the moment the doctor started to work on that hospital, crazyness ensues for everyone involved at the hospital and the doctor’s downfall starts to take off.

Watching A Young Doctor’s Notebook in its entirety should take only 80 minutes. The show is interesting and funny to watch (in a bizarre way) since we get to see how the actions from Radcliffe’s doctor — either professional or mundane — has drastic consecuences for Hamm’s doctor. The casting of Radcliffe and Hamm is awkward given their real-life height — you don’t grow at all past the age of 18 — and their chemistry is odd, but it somehow works in their favor. While Radcliffe plays a doctor who sees the world and life as pretty overwhelming and doesn’t want to deal with huge responsibilities, Hamm’s take on the older doctor seems pretty relaxed, which allows the comedy bits in the miniseries to work well for the most part.

The problem with watching A Young Doctor’s Notebook is the setup during the first two episodes, which feels slow to watch because of how the screenwriting displays how the older doctor got into trouble and the young doctor’s first days in an uneven way. Also, it’s kind of sad that neither of the main stars tried attempting a Russian accent, but that was expected not to happen given that most local productions don’t bother with the accent issue. However, the second half is the strongest part of the first season since it tackles the young doctor’s downfall (which involves addiction), and that is something engaging to watch along with the show taking a dark turn and employing sharper humor.

A second season has been confirmed not much ago. I don’t mind seeing a second installment of A Young Doctor’s Notebook because in spite of its initial uneven setup, the humor and interaction between Radcliffe and Hamm is fun to watch in small doses along with the crazyness happening in the show.