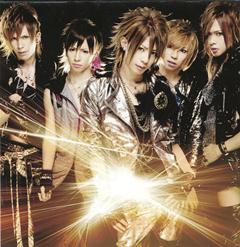 While only a three track single, Yume ~ Mugen no Kanata is a great release. ViVid is under the same umbrella as Alice Nine, SuG, Kagrra, the GazettE, and more, so you know that they’re just poised to jump into the spotlight soon.

As far as the songs go, I can’t get  Yume ~ Mugen no Kanata out of my head. I even wake up with it there. It’s actually a great blend of punk, Visual Kei, electronic rock and hard core. The second track, Rem has more classical elements mixed in, and showcases Shin’s vocals very well. Risk is a unique, plucky song that took me awhile to get used to, but I like the quiet introduction slowly leading up to the chorus.

It may be a short album, but there is a lot of promise held in those three songs. I hope ViViD shines as bright as their name soon and moves out of the shadows of their label mates.

Preview on Xiami.com | Like it? Buy it on YesAsia