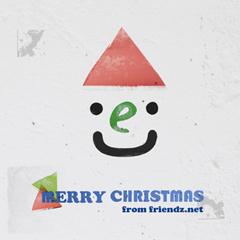 Once upon a time, there was a group of friends. They were equally musically talented. Then one day they made some videos and uploaded them to YouTube. And the rest was history.

Or so I like to think so. I’ve been following friendz.net for almost the entirety of their YouTube career now and I’m happy to say they just get better and better. With the release of their album Merry Christmas From Friendz.net, this talented group of musicians gave their fans a wonderful gift.

The biggest surprise for me on the album is leeSA’s cover of Last Christmas. I’ve grown to utterly dispise the song in the last few years because there are so many covers of it, especially in Asia. I have 17 versions of this song, and this one is hands down the best. leeSA is a talented singer, and the combination of her voice and the guitar arrangement make this song a beautiful and original rendition of the song.

Another quiet gem in the mix is the cover of Earth, Wind & Fire’s September, which I was completely not expecting to find on a holiday album. But it’s such a fun rendition that I’m very glad they included it on the album.

From the intro song to the last note of the last song on the album, this holiday album is a delight. Rarely is there an album from foreign artists that captures the warmth and happiness of Christmas music, and I’m happy to say that everyone from Friendz.net proved themselves perfectly capable of this task.