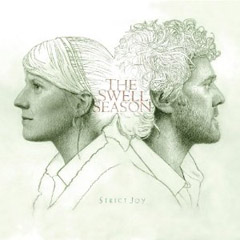 Glen Hansard and Marketa Irglova are back with The Swell Season’s sophomore album – without counting the successful soundtrack to the indie and music lovers favorite Once. It’s really tough to separate the characters of the film from the actual musicians on Strict Joy, which would work if they were tying to make the second part of Once… Twice?

Strict Joy captures that sort of melancholic vibe from the film, so it’s very familiar already. Wondering who they are is over, because we now relate this sound with them. It’s so easy to connect with the themes, soothing melodies, and Hansard’s harmony combined with Irglova’s and vice-versa. There are some truly great tracks on this album, which you should be looking forward to listening to if you haven’t yet.

The best tracks? The Rain, High Horses, The Verb, Love that Conquers, and Two Tongues.