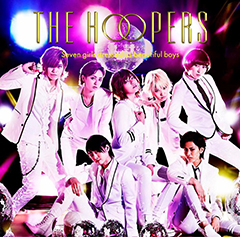 Though they’ve only released singles, The Hoopers have managed to create some pretty fantastic and energetic pop/rock that meshes perfectly with their voices. Though pop music in Japan does still have a level of oversweet sameness, there are bands like this septet of females who bring something creative in terms of concept and energy.

Single GO!GO! DANSU ga Tomaranai (GO!GO! ダンスが止まらナイ) is more than just your typical piece of bubblegum rock. What we have here is an explosive sound that definitely gives the group’s male peers a run for their money. What sets it apart is the vocal flavor. With seven voices, it’s hard to imagine them having trouble creating commendable harmonies. However, the song more than just highlights a vocal tightness probably unexpected from a group like this—one in which the gimmick is bigger than the group itself. The lead single showcases just how vocally adept some members of the group are. Mirai’s gorgeous alto is a welcome caress to the skin, while Sena offers the lower end of her second soprano to bring an added layer of flirtation. Then Haruki and Mizuki round out the moment before the chorus with dual peeks at the higher end of the vocal range of the group. Though not exactly brilliant songstresses, there’s definitely something to be said about the smoothness of the vocals, particularly Mirai’s lower timbre. As bubbly as the music is, it’s still worth noting how strong some of the vocals are.

This burst of rock candy continues on to the following track. DIAMOND proves a contrary title. The song has less of an edge than the lead single, leaning further toward Japan’s tradition of techno pop. And while it’s not Japan’s pop I fell in love with when first exploring their musical history, that doesn’t take away from the song’s catchiness. Here again, we get more of Mirai’s beautiful alto, but we’re also gifted some of her vocal versatility. She’s more than just an anchor, being able to add some power to the softness of the pop sound as well as executing an impressive amount of vocal subtlety, a lightness that highlights the prettiness of her voice.

The beautiful first bar of 16 to open up the last song is testament to just how lush Mirai’s voice actually is. She gives a truly lovely performance alongside the piano that opens Fire Flower before the song starts in earnest. This brings us full circle, back to the pop-lined rock of the lead single. While DIAMOND erred more on the side of sticky sweet, Fire Flower explores the harder edge of pop, the guitar soaring throughout the song and the drums providing a steady, throbbing backbeat. At the song’s apex, the girls gift us a truly beautiful harmony leading into the sweeping guitar solo. Fire Flower is overall an enchanting experience, definitely what one would want in a song to close a single/mini-album.

The Hoopers is a group of girls with a concept guaranteed get people’s attention—their tagline being, “Seven girls dressed as beautiful boys.” In my mind that already sets them up as nothing more than a kitsch band, a novelty group in which their gimmick’s all anyone ever remembers. And maybe at the end of the day that will still be the case. However, GO!GO! DANSU ga Tomoranai is a fun mini that does more than just provide a vehicle for their clever costuming and homoerotic schtick. Some of these girls have truly lovely voices, and it was a pleasure to experience those moments when the vocals were actually strong and at times pleasantly warm.