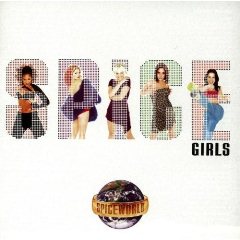 If you know anything about me, you know I’m absolutely head over heels in love with the Spice Girls. They’re campy, ferocious, and make music that’s both positive and endearing. And though many may not take them seriously as artists — not exactly surprising, to be honest — the fact remains their impact on pop culture is unconscionable. It hit a fever pitch with their sophomore album, Spiceworld.

It’s now become the stuff of legend, really. You open the CD case, see five impossibly fierce females. Then once you finally pop the disc in your player, you’re bombarded with voices, clamoring for attention, for someone to hear them over the din. Then the drums drop and the girls fly in in a flurry of “La La La.” And you’re totally thrown out of our seat into something you probably weren’t expecting. Spice Up Your Life, an anthem if I ever heard one, is a piece of power pop that simply gives you impetus to feel good no matter what mood you were in before the track came on.

The party continues with Stop, a song that urges the listener to just stop for a moment and take life for what it is. Moving right along, we’ve got the opening track for their film — aptly titled, what else, Spiceworld. Too Much is a mature bit of pop music with traces of R&B that even had my grandmother falling in love with the girls. It’s soulful, as much as pure sugar-coated pop can be soulful, and finds the girls hitting a point of vocal maturity that would follow them for the remainder of their active career.

Tracks like Saturday Night Divas and Denyin pronounced to the world these were, indeed, women with deeper thoughts and vocal shades than initially presumed. While tracks Never Give Up On The Good Times and Do It carry on their theme of positivity and good vibes. The members pushed themselves further, demanding the best from each other. Even the least vocally strong member, Geri, had her moments of glistening brilliance on this album.

That may be what’s so spectacular about the girls’ sophomore effort (and their last as a quintet). It’s pop music, sure. But there’s something richer, more technically grand about the album that pushed their talents past what people expected. Their songwriting was stronger, their production crisper. It would be understandable if they fell prey to the pitfalls of superstardom and created an album that was just Spice Pt. 2. But they decided to go further with their sound and bring older fans into the mix.

What’s definite about Spiceworld is that as much as it was full of the type of pop that seemed to run rampant in the 90s, it was still a powerful album, one that raised the bar of pop standards. Not only did it further endear them to their already unconscionable base of fans, it brought newer fans to the mix. If they didn’t manage it with their debut, they most certainly conquered the world with their sophomore effort and held it in the palm of their hands — some would argue still do. This is without a doubt one of the best pop albums to come out of the 90s. It was positive, mature, and had a polish and elegance that we’re trying desperately to get back to.

You can stream the album at Xiami or Spotify. You can buy the album at iTunes, Amazon (CD, MP3, Vinyl, and if you really want to go there, Cassette), and YesAsia.