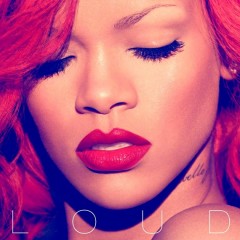 It’s clear that Rihanna is completely over the domestic abuse scandal between her and ex-boyfriend/fellow pop singer Chris Brown – she repeatedly refuses to talk about it in interviews, only hinting (albeit unsubtly) to it in her music. Rightfully so… her personal life was never intended to be the focus of her image. Instead, the focus should be how bright and brash her musical triumph Loud is.

Raising the then 16-year old Bajan girl as the Jay-Z protégée, Def Jam should be very proud of their little island princess. She’s grown into quite the modern icon, slotting nicely between insanity-glam Gaga, party rock Ke$ha and nu-bubblegum princess Katy Perry. Even pop vets Britney Spears and Beyoncé should be wary – RiRi’s star is starting to blaze over just about everyone.

If 2009’s Rated R was the volatile answer to her black-and-blue anger, 2010’s Loud is definitely the… loud return to dancehall-tinged club jams only Rihanna (and her ella-ella-eh-eh-eh’s) can bring. StarGate and Polow da Don bring their R&B-pop A-game, packing Loud with some massive melodies Beyoncé would kill to own.

Breakout Toronto rapper Drake was a wise choice for What’s My Name, adding a masculine touch to the breezy summer track. The steel drums are very dancehall, and the oh-na-na melody is catchy as hell; mono-syllabic singing has its place on the Billboard charts. The Shontelle-penned Man Down has RiRi singing in a delectable, full-on West Indian accent – if she’s faking it, she sounds ferociously convincing.

Funny that lead single Only Girl (In The World) wasn’t a showcase of the record’s sound – it’s a one-sided Euro track that gets lost in the shuffle of some really great pop tunes.

The hushed heavy breathing of Skin could have served as a lovely ending, had Def Jam decided not to tack on the cheesy part two to Love The Way You Lie, with Eminem. The bland melody still stands, and Eminem is just grating. The only weak spot to an otherwise exceptional ordeal.

Loud is entirely listenable, a rarity in the pop music game. Most pop records aren’t actually albums, but half-assed efforts to put #1 singles in a non-EP package.

Admittedly, Rated R had skippable tracks that broke its angry, atmospheric flow. But, Loud keeps the volume and performance intensity high. Girl’s got personality behind the studio mic. Keep up the good records, and she can slot beside everyone else as a pop vet.