P!nk – The Truth About Love 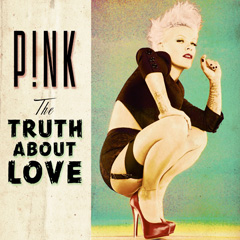 It’s been four years since Pink has released a proper studio album. Sure, we’ve been given radio-friendly tracks and loser anthems [1] with singles like Raise your Glass [MV] and F*ckin’ Perfect [MV], which had by themselves become cute pop culture fixtures. But ever since the release of Funhouse, I have sensed a stagnation in her style, which — as a fan — saddened me. We’ve all come to see Pink as the slight pop rock troublemaker of pop music [1], with a wicked attitude and off the hook personality — every girl’s best gal pal, telling you to your face the mistakes you’ve made, but also the one giving you a shoulder to swear to your heart’s content. I loved Pink as a staple of growing up, but at this point in time, it seems like we’re growing apart.

The Truth About Love seems to put Pink’s musical career in a favorable commercial stand — she’s now renowned enough to be well respected in an industry that hasn’t been able to produce much outstanding new talent in the pop front, and music with catchy beats and hooks to make her an easy play on the radio and MTV. This album delivers more of the same, a style brought with I’m Not Dead and Funhouse, but with much less of the content that made those albums worth more than the occasional listen.

The production of the album is tight, it’s got tracks designed to earworm into your brain if you happen to stumble onto them on a commercial, featured on a TV show, or maybe even the radio. — Does anyone listen to the radio any longer??? But is that really what Pink has become? Starting with the first single Blow Me (One Last Kiss), Walk of Shame, or the Max Martin-penned, Blur’s Song 2 or Ke$ha’s Woo Hoo sounding Slut Like You, they’re your typical, quite irreverent Pink songs — especially the latter, which uses some explicit language that may have been funnier and fresher eight years back.

Even collaborations with Nate Ruess (from Fun.) or Eminem seem skin-deep, with Eminem reduced to dropping verbal bombs… about what he might do on a wild weekend in Here Comes the Weekend with verses like “I’m not Puffy but I’ma run the city tonight/When I hit it, I might act like a frickin’ idiot/Diddy mixed with a medieval knight, big city lights,” which is, you know, chill-inducing. I could maybe vouch for Lily Allen’s (now: Lily Rose Cooper) collaboration on True Love, which follows up the bipolar love/hate relationship of songs like Leave Me Alone (I’m Lonely). Then again, that’s Been There Done That territory.

The Truth About Love seems like a place where Pink has been comfortably sitting since 2006. It may be easy to digest music, designed to grab a generation younger than Pink’s core, ready to reach #1 on popularity charts, but as an album part of her discography, it leaves much to be desired. The album goes back to the substance of Pink’s debut, Can’t Take Me Home, and regressing to not-a-perfect debut is never a good thing.

And with the promotion of the album, you can actually get all the lyrical weakness in your face, since they decided to release all of the songs in Lyric Video form.

Preview on Xiami.com | Like it? Buy it on Amazon | Amazon MP3 | iTunes