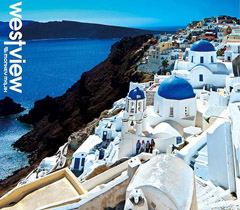 Then there’s Monkey Majik, a group consisting of Canadian brothers Maynard and Blaise Plant, and Japanese members Tax and Dick. While the Plants sing, Tax and Dick play the instruments. They perform accessible pop tunes with catchy guitar riffs and strumming about love and fun… in funny Japanese and English.

Their latest album, westview — that might be the compliment to their second album eastview in 2005 — is their sixth album, which comes charged with acoustic catchy pop tunes in six full tracks in English, and the rest in funny Japanese or combining it with English.

Monkey Majik infuses its music with rock elements, but remains mostly pop, except when they do songs like Dream World — which was the theme for mobile drama The Party is Over — or HALO, which resemble pop rock ballads, or the track Disco Girl, which is the heaviest track on the record.

All in all, westview is on par with other Monkey Majik albums in terms of music, but doesn’t leave their comfort zone enough to stand out in their discography, which is full of great radio tunes for the season, but doesn’t hold together as an album telling us a story.

Preview on Xiami.com | Like it? Buy the album on YesAsia.com | HMV JP