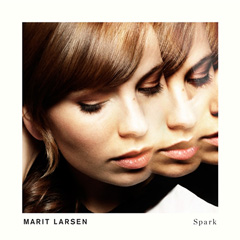 I think I had to have Marit’s third studio album in my hands to actually get why I hadn’t taken to its musical direction like I had done with her previous albums.

Whenever I had listened to Marit albums, it has always been like following a story. In her debut, Under the Surface, it was like a magical realism trip of the ups and downs of love. With incredible rawness and energy she’d explained the bitterness of love with such playful sincerity, you couldn’t help but sing along with her.

In her second album, The Chase, she would tell us the story of a woman falling in and out of love — really, in a perfect arc. Spark, however, is weird. It starts out great actually, swiftly immersing us into a new relationship; however, I’m missing the folksy sound and the glockenspiel and all those instruments she used to use back then, as Marit is using her basic strings set (cellos, violas and violins) with guitars and a piano.

The sound in Spark is certainly more pop rock than ever, with really soft hints of folk with a grand background orchestra. It makes the album seem a lot more uplifting on tracks like Don’t Move and Coming Home, but she shows her vulnerabilities in songs like What If, in which she confronts herself against all her characters’ weaknesses:

What if I froze in my tracks,
decided to turn without warning,
breaking my promises,
breaking your unknowing heart.
Now that I know who you are,
there’s no way around it-
You’re too good for me.

Then she’s painfully heartbreaking in I Can’t Love You Anymore and the rest of the tracks, except for Coming Home as well as Me and the Highway — I couldn’t help but wonder if Marit had been listening to a lot of the Eagles when she composed that one. From all the songs in the album, Me and the Highway seems to be that odd track out, seeming to fit in the country crossover genre.

Ultimately, that’s my issue with Spark. But that’s because Marit has set herself that unbelievable high standard of making an album. The tracks in the middle of the album don’t flow and connect with each other. It doesn’t make sense in my somewhat musically-square brain that I Can’t Love You Anymore can be thematically followed by Coming Home. LOL It feels like a scene is missing!

Anyway, the album still made it to my list of 2011 Music Highlights~

Best track? Have You Ever, That Day

Preview on Xiami | Like it? Buy the album on Amazon.com