Marina and The Diamonds – Electra Heart 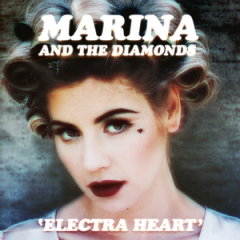 In The Family Jewels, Marina Diamanidis proved that she was a great singer and a talented songwriter that uses comedy effectively and with attitude. Electra Heart confirms this point once again, especially during tracks such as the energetic opening track Bubblegum Bitch, catchy yet comical Homewrecker, the melodramatic-suicidal Teen Idle and Starring Role, which tackles both love and feminism at the same time.

The production values are definitely better than The Family Jewels, given that it features collaborations from several record producers such as Dr. Luke, Diplo, Stargate and returning collaborators Greg Kurstin and Liam Howe, the latter being heavily important on The Family Jewels.

However, my biggest issue with Electra Heart is that it is an electropop/synthpop album. I’m not too fond of electropop in general, but I did like a few songs from that genre — Lily Allen’s Fuck You [MV] and Julian Casablancas’ 11th Dimension [MV] are good examples. In Electra Heart, the electropop genre manages to overshadow the attitude and honestly that her lyrics present, almost resembling Katy Perry in sound and giving the album quite the repetititve (and uneven) feel at times.

It might take a while to adjust to the electropop sound in Electra Heart, but the album is still at least worth a listen once (or maybe twice) because Marina explores characters and archetypes with her lyricism in a very interesting way. Let’s hope for her third album turning out better than this.