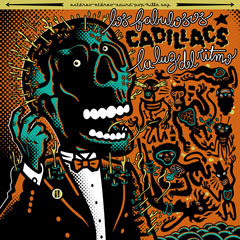 After a seven-year hiatus, Los Fabulosos Cadillacs are back with La Luz del Ritmo (The Light of Rhythm), which includes five new tracks, six newly arranged old Cadillacs songs, and two covers (including The Clash’s Should I Stay or Should I Go).

Being appreciative of Vicentico’s musical ventures is one thing, fully enjoying the new arrangements in some Cadillacs’ classics is another. Mal Bicho is one of those songs, which I listened to growing up and love to the date. A song of such brilliance can only suffer from the new musical arrangements and will probably only be truly appreciated by some die-hard Cadillacs fans or people that, for some strange reason, haven’t heard the original.

Should I Stay or Should I Go (Si Me Quedo o Me Voy, as the chorus says), however, gets an interesting Latin ska punkish rock vibe treatment. Overall, La Luz del Ritmo is your average sounding Latin music album with a never-missing twist of Cadillacs flare… not bad, but quite forgettable this time.

Buy the album on Amazon.com