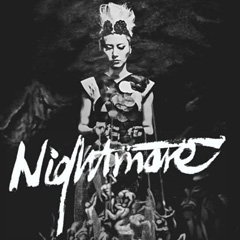 2006 Super Girl winner Laure Shang (Shang Wenjie) releases her fourth album, in which she continues her exploration of electronic pop in English and French, being aptly named the Lady Gaga from China.

The first track, Lonely Lullaby, is an electronic slow jam that fuses Dong-ethnic chants with rather simplistic lyrics about how loneliness takes away all pleasure in life. The second track, Love Warrior, continues with this style of music, but gives much richer rhythms and the lyrics resemble traditional Chinese lyrics a lot more.

In Nightmare, the beats pick up and continue with Dong and Folk-sounding chants, though not as prominent as in the first two tracks. It seems the album loses the traditional sounds and begins focusing a lot more on the synthesized pop. Track 4, Ms. Lane Crawford, is a full-on electronic pop song and it continues with Girl, a much more beat-driven electronic pop that suffers from simple English lyrics, but sounds great and would look amazing on screen with killer choreography.

S.O.S. starts out as very Lady Gaga-esque and is probably the most boring track of the album. Nightmare continues with Live Beautifully, a Mandarin version of Kylie Minogue’s Can’t Get You Outta my Head, which sounds pretty much as if Minogue could sing in Mandarin. It then continues with Je Passe ma Vie à t’Attendre (I Spend my Life Waiting for You) with Belgian musician Jean-Francois Maljean, a song used at the Shanghai Expo to promote ties between China and Belgium. Finally, the album closes with We Will Fly, a piano ballad that’s probably the most “normal” sounding song on all the album.

Nightmare is an ambitious project. Laure Shang wanted to create an album that’s interesting and accessible for international audiences. With songs like Love Warrior, it works — the song is unique and grabs your attention. However, the album lacks direction after that. There are also few radio-friendly tracks, unless you count Live Beautifully, which is the cover of an already radio-friendly track.