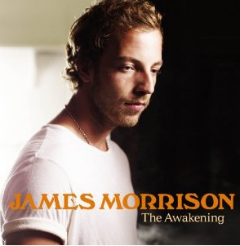 I think that one of the things I love the most about James Morrison is his voice. It’s soft yet raspy and just a little dark — a bit like dark chocolate with a bit of chili? I guess I am getting carried away here.

The Awakening is Morrison’s comeback to the music scene after three years. Many things happened in that time span — Morrison lost his father at the same time he became a father. You can hear that this album is personal. It has much more soul and depth.

A very well-rounded album. Morrison doesn’t walk far from the soul sound, he stays there throughout the album, adding a bit of r&b to keep things going. But in all, The Awakening is that kind of album that you can listen to in the background — it doesn’t disturb but helps you relax. It’s a perfect companion wherever you are.

Best tracks: I Won’t Let You Go, Up, Person I Should Have Been, Right by your Side

Listen to the album on Xiami. Get the album as a CD or as MP3s on Amazon.