Incubus – If Not Now, When? 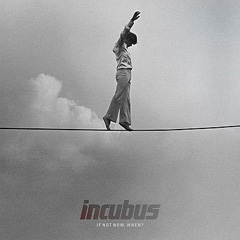 Incubus has always been one of my favorite bands for years and I was pleased to hear them releasing an album for this year in hopes that it wold be better than Light Grenades, which I didn’t enjoy much.

If Not Now, When? is different from previous Incubus albums, but that shouldn’t be a surprise to Incubus fans since the band has always changed their direction on pretty much every album they release. A huge difference between this album and their previous work is that If Not Now, When? doesn’t have elements from Light Grenades at all. Every Incubus album, at least, had elements from the album that came before it. I’m fine with that, but this album will most likely piss off those who were hoping to see them regress back to their S.C.I.E.N.C.E. days. Guitarist Mike Einziger says it best here:

Over the years, we’ve become less and less aggressive as far as our music goes. There’s always moments of that aggression, but this album is pretty free of that. It’s definitely not a hard rock record. I think we’re asking a lot of our fans. We’re asking them to listen for things that they normally wouldn’t listen for. We’re not leaning on the strengths of our last records either. It’s that much different than our previous work. I think we took a risk by making this type of album. But it’s not some crazy, experimental album. It’s a very straightforward concise album. And it’s a lot more focused than anything else we’ve ever done. So naturally I think this might disappoint some people, because there’s a pretty obvious lack of heavy rock music on this album.

For their seventh studio album, Incubus shows a romantic side on If Not Now, When? in terms of their sound and lyrics and this grows throughout the entire album. Like Mike said, there are moments of agression which can be heard on the second half of the album, but it’s still an album with a romantic undertone and overtone at heart.

Thankfully, this album ended up being an improvement over Light Grenades, despite the softer direction taken. It’s good to hear Brandon Boyd’s singing sounding more relaxed and calm throughout the album, which helps a lot for the theme that If Not Now, When? promotes along with his melodic voice.  For an album that feels poppy, most of the songs are pretty good to listen to, the transition from track to track flows well. It’s simple — I mean that in a good way — and it still sounds pleasant on repeated listening.

Fair warning to anyone who has listened to Incubus before: if you want to enjoy this, listen for what it is, not for what you think the band is. For me, I always loved them for daring to change styles, offer something different and still managing to get a good result out of it.

Preview it on Xiami.com | Like it? Pre-order on Amazon.com