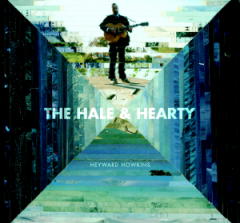 I’m always intrigued to find out what it is that makes “indie” music truly indie. Most associate it with a college-esque, mourning, post-teenager’s lament, a sound that’s as cliché as anything the so-called “indie” contingent attempts to separate itself from. However, once in a while an artist comes along and redefines the genre, showing the audience that all “indie” means is not having the backing of a major record label.

Heyward Howkins’ début effort is simply hypnotic, a stretch of the imagination. It’s a walk in a forest, followed closely by guitar-playing nymphs and simple vocals reminiscent of the Sgt. Pepper-era Beatles: full of mysticism and wistful sound structures.

The simplicity of the album is second only to the way in which Howkins seems to experiment with sound. It’s in one moment homey and familiar and in the next grandiose and triumphant, as in the structure of title track Hale & Hearty. It also tends to favor sonic dissonance, as in track Spanish Moss. It isn’t an album constructed of thousands of bode instruments, but inherent in its simplicity there is a great deal of detail and musical exploration.

The lyrics speak of nature, how that naturalness finds itself within the turbulence and romance indicative of two lovers coming together, or a man attempting to better himself despite his shortcomings (Cocaine Bill). One gets the sense that Howkins is attempting to tell us a story — no more than one would expect from any artist. However, what separates his work from milieu others who want to allow us into their world is Howkins is attempting to bring a bit of magic to his journey. One gets the feeling that she’s being transported into a different state of being all together, the body disconnected from the mind, the mind from the spirit as it floats away.

At times the sparse intricacy of the album can get a bit heavy-handed, not allowing the listener a moment to breathe and take in the decadence of the sound, as in the three songs following Sugar Sand Stitched Up, and the incessant amphitheatre sound of Howkins’s vocals can get a bit grating on the ear; however, overall the experience is so enigmatic, bordering on ethereal, that the seeming overindulgence of it can be easily forgiven.

The Hale & Hearty is a daring début, harkening back to the start of such artists as Passion Pit or even Björk, in which the sound is so unexpected it paves the way for one of two musical paths: a career built on continuing to push creative boundaries, or being trapped in a never-ending cycle of the same sounds that made people take notice in the first place. I sincerely hope Howkins falls in the former category.

If you like the album you can listen to it on Bandcamp, and buy it at Amazon or on iTunes.