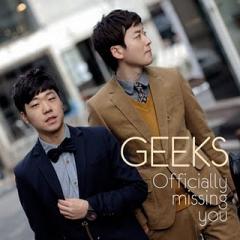 Geeks’ debut album is certainly promising.  The music is good, the vocals are nice.  One of the guys reminds me a little too much of G-Dragon in pitch and timbre, but I guess if you love G-Dragon you’ll love this duo.

Officially Missing You is a mellow tune in good R&B fashion with a catchy chorus and a good title.  Damdamhe is also very R&B, with catchy choruses and velvety vocals.  On the other side, Hello and Feels Good are more true to Hip-Hop, with higher energy and faster beats.  These two are the ones that will have you feeling like you’re listening to G-Dragon, I swear.  Just listen to it yourself!

Similarities aside though, these two guys make a very good duo.  It’s good music to listen to while cruising with your crew in the middle of twilight or on your way to hang out.  It’s very chill and catchy.  Totally recommend it.

One negative note about the album though: Don’t get too excited about the “acapella” songs.  The songs are literally the exact same as the originals, except they don’t include the music and the vocals are enhanced with auto-tune.  Might be just my opinion, but you shouldn’t sell something as “acapella” if it’s actually auto-tuned.  What’s the point?  It’s an odd thing to include on the album. However, overall I recommend the original songs and the instrumentals.