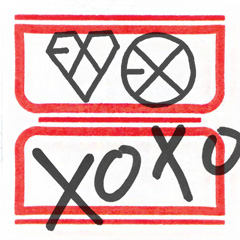 A year after their first EP, EXO releases their first full-length album, XOXO, to a great deal of expectation. Considering all the promotional activities and fan hype surrounding the group’s elusive comeback, there was a lot of talk about if it could live up to all the excitement.

Much in the fashion of their successful and well-respected predecessors, Super Junior, EXO consists of two “teams”: one to handle promotions in Korea and the other to handle China. This obviously means there are two versions of XOXO (Kiss for EXO-K, Hug for EXO-M), both with the same songs but in different languages. Both facets came together for lead single and opening number Wolf. The track is something of an odd amalgamation of genres (rap, dubstep, and elements of rock) that more perplexes than pleases. It obviously tries to make a powerful statement as the opening number, but with the childish and, quite frankly, cheesy addition of howling in the background, it’s easily dismissible.

XOXO starts in earnest with the second track. Baby, Don’t Cry is a simple love song and the first real glimpse of the group’s vocal capabilities. It’s a good song, not exceptional but most definitely a good representation of the range of the group. As with a couple debuts from the SM Entertainment catalog, XOXO is curiously ballad heavy, complete with pop/R&B and beat-driven love songs. Following Wolf, the next three tracks are the type you’d hear on any pop group’s album: sappy love songs that are sure to make young girls swoon. However, they seem to blend together, not differentiating from one another in any particular way — except for the obligatory dubstep/rap break in track Black Pearl.

XOXO breaks up the monotony with dance track Let Out The Beast — a signature SM-produced track. It’s most certainly a more cohesive and less ridiculous prospect than the opening number, relying less on gimmick and being more straightforward. However, almost instantly the album goes back to the fluffy beat ballads.

XOXO is definitely an album you’d hear from any group nowadays. There are sprinkles of comprehensive pop (3.6.5, Peter Pan), decent balladry, and obvious dance tracks (with recycled beats and auto-tune). Sadly, the album overall is very one note, not really peaking anywhere, maintaining a consistently simple pop album formula throughout. There wasn’t that one song that made me stop and say, “Wow, so this is EXO! This is what all the fuss is about!” There’s a little something interesting with track My Lady, a bit of pop/jazz that seems to come out of nowhere. But mostly it’s the type of album I could hear a couple times and not pinpoint anything I couldn’t find on any other pop album from any other group.

The construction of XOXO speaks to the overall dynamic of EXO: a mixture of varying genres that sometimes hits, sometimes misses but is overall pretty uninspiring. EXO’s first full-length album, while a decent pop offering, doesn’t add anything to the overall conversation. It’s just another pop album from another pop group. Obviously EXO is young, still very green and desperate to make their mark just as any group before them and any group after — debuting in an environment overwhelmed with much of the same thing. There’s good potential here, but unfortunately nothing indicative of more than being a decent pop group with decent pop songs.