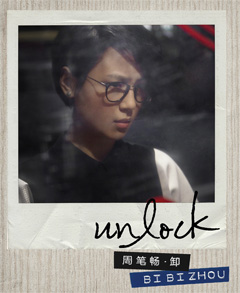 One of three successful Super Girl contestants is back after her label split and she founded her own label [1]. Unsurprisingly (or not), she’s been back in the studio with some of the people she worked with from her NOW/WOW era, as well as with people she’s met during her past couple of years with Gold Typhoon, and such is the way of Running Away, written by Ge Dawei (葛大為) and composed by Franck Fossey (some of his pop culture credits go to Popu Lady’s KISS ME and Marta Sánchez’s Si Crees en Mi). The flag-bearing first single doesn’t do justice to the overall feel of the album and is probably one of my least favorite tracks in all of Bibi’s complete discography. It’s all this awkward East Meets West that happens sometimes not so naturally, unlike some other examples in the album.

The greatest hurdle of Unlock is that it truly begins on the second track, Close Friend, which showcases Bibi’s natural style, mixing the old Bibi that worked with Kubert Leung with the new Bibi that worked with singer-composers Sandee Chan (who also pens Specimen) and Guo Ding (who composed my FAVORITE track [1] of Black.Choice.White). It happens throughout the album with work from Khalil Fong (in Jealousy), XiaoHan (in Ribs and My Own Entertainment), and Dean Ting (丁世光). However, it’s not only the names involved in the making of the album, it’s also the style that pushes Bibi back into the Who Touched my Violin String days, with quality arrangements of having already been in the industry for years.

One of the tracks that takes me back is The Hunt, which was composed by Vancouverite Jay Leonard Juatco [1] and Jigs, which starts out as a normal pop rock song but then evolves into this disco funk pop and roll sound that’s just out there, much like the sound on  NOW/WOW. Another East Meets West type of song on the album is Specimen, with music by Swede duo Gravitonas and lyrics that match perfectly with Sandee Chan’s style [1][2]. The arrangements and Bibi’s velvety, slightly rockish voice is just the icing on the cake.

More pop rock flavor comes at the hand of No Need, a very Chinese-styled rock song with lyrics by Tao Le Fei (桃乐妃) and music by Xiao Heng Jia (萧恒嘉) that gave me a lot of Jay Chou vibes. Not necessarily a good or bad thing, but at least Zhou has an amazing voice to match the song’s prowess. However, the best and most outstanding track on all the album is left to close it. Simple strings and a piano give way to Good Night, which was written and composed by Bibi herself and without even looking at the credits you know the song best suits her. You just gotta hear those few sounds coming out of her vocal chords. The music mastery of that sound is like slicing through the environment whenever it plays.

The best element in Unlock  is and always will be Bibi’s voice. Throughout the years that she was involved with Gold Typhoon, she was able to expand the range of her voice, reaching on-pitch highs and soft delicate whispery lows (like in The Most Beautiful Era) that will make your soul quiver. You’ll get tons of that on this album. Zhou will probably take one or two more albums to ease herself into this new career path, and I’ll probably stick around for that. Whenever my faith seems to falter, she always delivers.

You can preview the album on Xiami | Like it? You can get the album in YesAsia. There’s also a Pre-order Limited Edition available.