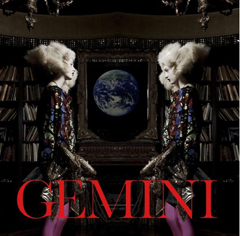 The reasons why this is a must-hear must-have in the alice nine discography starts with the fact that most, if not all, of the songs on the new album are composed by bassist Saga. That paired with guitarists Hiroto and Tora’s masterful solos, Nao’s increasingly improving drum scores, and Shou’s ever high pitched voice ensure this as one grand Jrock extravaganza, as well as one of my favorite alice nine albums up to this point. Even the cover art is great.

The most notable part of this album is definitely the Gemini songs. If I were to make a comparison, I would say that the Gemini songs are like a ballet of three acts. You don’t even have to understand the lyrics to get the feeling that you’re hearing a story as the three songs play one after the other. It begins with a slow dramatic intro, and as you move on, you get that rising action until it explodes into the climax of the second song. It then ends with an equally dramatic  resolution. It really takes your breath away.

Songs like Rumwolf and KING&QUEEN denote the stronger, darker side of alice nine’s music. My favorites of this album would have to be those two plus Gemini-I-the void (the climax of the Gemini epic). On a side note, the interlude song Entr’acte reminds me of Final Fantasy music. alice nine fans will know why this is amusing.

Overall, the album is very cohesive, the instrumentation is beautiful and the concept is mysterious. A must-listen for Jrock, rock and alice nine fans alike.