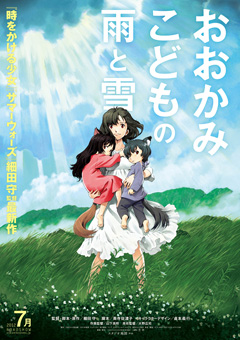 If there was any indication that Wolf Children would be good was — besides Hosoda’s non-Digimon animation — that Aoi Miyazaki has an incredible knack for getting pretty great material. Be it as a teen with films like Gaichu, and crafted a popular career with weepy films like Tada Kimi, Virgin Snow or Sad Vacation, and extra chirpy on Nana or those Earth, Music & Ecology commercials [1].

In Hosoda’s fairytale-like coming of age story, Miyazaki plays Hana, a nonchalant university student who meets a mysterious man (Osawa) who attends classes even though he’s not a student there. After a little back and forth, they start hanging out, feel attracted towards each other and feel close enough for him to reveal that he is really a Wolf Man (hint: not a Werewolf). Eventually, of course, Hana gets pregnant and gives birth to Yuki (voiced by Oono as a child and Kuroki as a teen), a vivacious ball of energy that can swiftly shift back and forth between being a girl and a wolf.

Hana’s life couldn’t be happier now that she’s with the man that she loves, with her daughter and a new baby on the way, a delicate boy named Ame (Kabe as a kid, Nishii as an older boy). But one day, all that comes to an end when her husband passes away, and to avoid the weird looks of society, she moves as far away from civilization in the middle of fields and mountains to raise both her wolf children.

Disregarding how creepy it felt to see Hana with the Wolf Man, Hosoda has crafted a delicate story about families, growing up and finding your own path. Of course, it does help that Ame and Yuki are incredibly adorable as children, and the amazing animation highlights the dynamics of their relationship. I loved how Yuki’s personality was so hyperactive and you could see it during her morphing while running scenes in the forest. In contrast, Ame’s introvert nature made one to instantly want to cuddle with him.

Throughout Hana’s story and the interaction with her kids, you can probably see how the treatment from children to teenagers evolves, it doesn’t cause great pains to Hana and she’s backed by some very supportive locals, a stark contrast to the noisy city people, but we can witness some of Yuki’s issues to fit into some of the gender roles. Though I would have preferred a gender reversal [1] for the story, I understand the script’s intent to calm the ball of energy that Yuki was as a child, as we understand the need for Ame to find his own sense of self. It’s also a script strength that makes you not fault the technical aspect to instead fault Ame for one of his last decisions.

The layouts in Wolf Children are beautiful, specially those general shots of the town being covered by snow (Yuki) or rain (Ame), they all added a sense of atmosphere that enhanced the mood and the themes in the film.