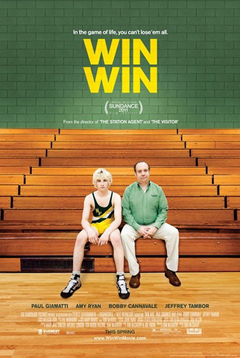 Win Win stars Paul Giamatti as Mike Flaherty, an attorney from New Jersey struggling to keep his wife (Ryan) and his daughters (Foley & Kindred) happy. He also works as a wrestling coach with co-coach Vigman (Tambor), but the team has been on a losing streak. And the heating system at his workplace has problems, of which his employee Shelly (Arianda) constantly reminds him.

Upon learning that one of his clients could pay him to be his guardian, Mike becomes Leo’s (Young) legal guardian and puts him in a retirement home, as suggested by the judge (Wilkins). He then stumbles upon Leo’s bleach blond grandson Kyle (Shaffer), who happens to be a very talented in wrestler. Mike takes care of him and lets Kyle stay at his place, despite opposition from his wife.

Things finally seem to be going great for Mike, getting a double paycheck and a wrestling star with potential to lead his team towards victory. That is until Kyle’s mom (Lynskey) shows up and threatens Mike’s ideal life conditions.

Well, I just tell myself that the guy on top is trying to take my head and shove it underwater and kill me. And if I don’t wanna die on bottom, I have to do whatever the fuck it takes to get out.

From start to finish, Win Win is pretty much a warm, sweet indie film that benefits greatly from a very strong cast and solid scripting by Thomas McCarthy (The Station Agent). The plot twists and compliations flow smoothly and the story makes it easy for the audience to connect with the characters. There is a pretty good balance between the comedy and drama thanks to everyone involved. Paul Giamatti playing the “ordinary guy” effortlessly and carrying most of the film. Amy Ryan, Jeffrey Tambor and Bobby Cannavale — who plays as Mike’s best friend, Terry — provide most of the humor with ease and charm. Newcomer Alex Shaffer is a surprise revelation here and manages to hold his own with the rest of the cast. He has great chemistry with Amy Ryan in particular. The dramatic aspects are provided by Giamatti, Young and Shaffer during most of the film, but it notably increases once Melanie Lynskey’s character shows up.

Though there are many good things to see in Win Win, it does come with some flaws. The issue with the heater could have been solved easily without having Mike overcomplicating his life. The appearance of Kyle and how he’s inserted in the film can be seen as conventional, but Kyle is definitely needed to get the story rolling. And as much as I like Melanie Lynskey, she looks way too cute and sweet to be playing a backstabbing, selfish, drug addicted mother. Don’t get me wrong, Lynskey was good in the film, but maybe someone like Lisa Kudrow could have fit the role of Kyle’s mom better from an antagonist POV.

In my personal opinion, Win Win is easily one of the best films I’ve seen this year so far. I’d suggest anyone to watch it. Solid performances from the entire cast and a sweet, but very accessible, story makes Win Win an admirable winner. Okay, maybe those final words came across as cheesy, but you get my point anyways.