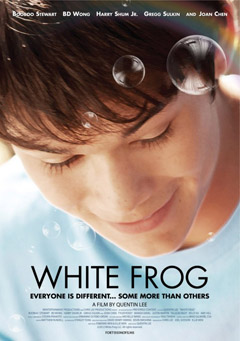 Asian Americans aren’t as represented on American media [1] as often as maybe some would like to be, because (some people believe) Asians aren’t necessarily angsty and keep to themselves. Or maybe there just aren’t enough Asian Americans going into media production or acting positions as there are into research and technology advancement jobs. Asian Americans are even underrepresented in Asian films because they’re obviously not entirely Asians either, so sometimes they have language problems (accents may be one of them), so it’s always interesting to see an Asian American production.

In White Frog, Ellie and Fabienne Wen set out to tell the story of a well-off Asian American family with a few skeletons in their closet. Irene and Oliver Young (Chen and Wong) seem to have a pretty nice life, no money trouble nor any other external issues, a perfect older son Chaz (Shum) about to head to university, and their younger son Nick (Stewart), who suffers Asperger’s Syndrome and idolizes his older brother.

Everything begins falling apart when Chaz is killed in an accident that leaves Nick in a very vulnerable position that isn’t exactly improved by his Asperger’s. Unable to cope, Nick ends up befriending his brother’s friends, including Randy (Sulkin), for a bit of poker and on the path to discover who his brother really was.

I have mixed feelings about White Frog. Acting is decent — Stewart’s interpretation is endearing and complicated — direction is competent, and there’s a message there of understanding and acceptance directed towards very traditional family units, who are the ones who should be watching the film. However, there’s something missing. I feel like White Frog was trying to make Chaz the big reveal (no, he does die!), but it doesn’t feel as poignant as I feel it should have been with the explanation of what a “white frog” is- the big reveal seems as important as changing baby blue for orange. Big but at the same time small.

Notable about the film’s production is having Joan Chen and, to a certain extent, BD Wong, who play a pair of very confused parents, who at the same time confused me in their reactions. For a moment there I thought Chen would burst into a hissy fit worthy of her role on The Home Song Stories, however, Amy Hill has to be the highlight for her rather short appearance as Nick’s psychologist, Dr. King, and her dead-on monologue on Asian parents and their obsession with doctors.

Apt film if you come to run into it, but not strongly recommendable.