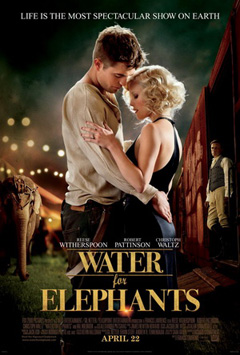 Based on the novel written by Sara Gruen, Water For Elephants follows Jacob Jankowski (older version played by Holbrook; 1931-Jankowski played by Pattinson), who tells his story of when he joined the Benzini Circus during 1931. Shortly after his parents died in a car accident and he lost his house to the bank thanks to his father being in debt because of paying Jacob’s education as a at Cornell University, he hops into a train filled with circus workers.

During his stay at the Benzini Circus, he falls in love with Marlena (Witherspoon), the star performer of the circus who is married to August (Waltz), the owner of the circus. Jacob gets a job at the circus thanks to his veterinary science education, which proves useful to the circus. He also has to take care of Rosie the elephant, the main attraction of the circus, who responds best to commands spoken in Polish.

A few changes were made in the adaptation of the film. Most notably, the elimination of the Uncle Al character that was the Benzini Circus’ owner in the book. August trains the animals and also serves as the circus owner in the film adaptation instead. Other changes includes the way the film arrives to the ending and the minor characters from the circus being reduced in screentime.

This may not be a surprise to those familiar with Francis Lawrence (Constantine, I Am Legend), who is mostly known as a music video director (Lady Gaga – Bad Romance, among several MVs), but Water For Elephants is visually beautiful and that’s the most appealing part of the film. It will make you feel tempted to attend a circus after watching the film. The story told here is pretty good in theory and the best actor in the film without any doubt is Christoph Waltz. Sure he is playing a role similar to the ones he did in Inglourious Basterds and The Green Hornet (read: charismatic antagonist), but he still remains as the best actor to watch here. Rosie the elephant is also pretty good to watch during the scenes in which the animal is featured.

The part that hurts Water For Elephants the most is the lack of chemistry between the main characters, especially between Pattinson and Witherspoon. Pattinson wasn’t bad as the lead character and his acting here is definitely better than in previous films he’s worked before, which isn’t saying a lot. But when he’s paired with Witherspoon, the romantic aspect between Jacob and Marlena lacks a lot of passion. Even when they have sex, you get a “cool story, bro” vibe out of it rather than it feeling like an important deal. The way Water For Elephants arrives to the ending scenes feels rushed too, it could have used a few extra minutes to flesh it out better. And despite being more talented than Pattinson, Reese Witherspoon is miscast as Marlena.

In the end, Water Fot Elephants is worth the watch based on its visuals, Christoph Waltz and Tai the elephant. But it could have been better in terms of the love triangle and the ending scenes.

P.S: Believe it or not, Sara Gruen originally wrote her novel as part of the National Novel Writing Month (NaNoWriMo) event.