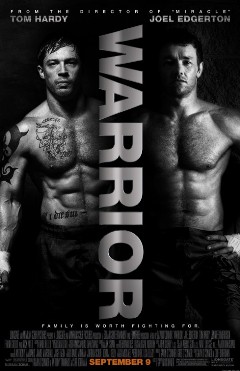 Over the last six years, the rise of mixed martial arts in popularity — UFC in particular — has been noticeable everywhere… including the film industry, which has seen a increase of MMA films being produced. Among the MMA films produced, Warrior stands out strongly because it succeeds at respecting the sport and telling a good story at the same time.

The film follows estranged siblings Tommy (Hardy) and Brendan (Edgerton) as they enter an MMA tournament for different reasons. While Brendan, who was a former UFC fighter that now works as a high school Physics teacher, does it to fix his family’s financial situation, former U.S. Marine Tommy enters the tournament in order to help the family of a fallen friend.

But as all tournaments go, there can only be one winner.

Warrior shares similarities with sports films such as Rocky, The Wrestler, and The Fighter because families are involved. Warrior‘s tagline — “Family is worth fighting for” — comes into play through Tommy and Brendan’s father Paddy (Nolte), whose past alcoholism ended up separating his own family and putting his sons against each other. As they reunite once again during the tournament, we see him as a remorseful and sober man, hoping to still be considered part of their families, even if that seems unlikely to happen. Nick Nolte’s raw performance as the tragic Paddy is poignant and along with its great fighting sequences is easily the best thing Warrior offers.

Tom Hardy and Joel Edgerton also provide great performances in Warrior. Tommy and Brendan differ in personality and fighting styles, yet both of them have similar demons to battle as well as equally good reasons to win the MMA tournament. While Edgerton excels as the everyday man moonlighting as an underdog fighter, Hardy plays the raging man who is heavily scarred by his past. And when the inevitable happens, it is compelling to watch.

The film isn’t without flaws, as it suffers from typical sport movie clichés, predictability, and the logic-defying idea of two unknown fighters working their way through a tournament with elite MMA fighters. However, the strong performances from Hardy, Edgerton and Nolte rise above the film’s flaws and delivers an enjoyable film with emotion that works for both MMA fans and film lovers.