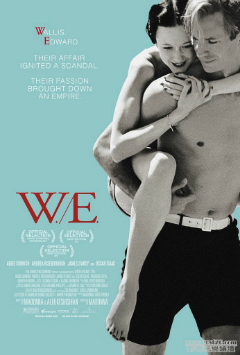 The movie that many are curious about. Our dear Juan Barquin was crying rivers that I got to see this first. I will admit, I saw the trailer and didn’t think much about it. The selling point of this movie is the fact that Madonna is behind it. From directing, writing to producing – this is Madonna’s baby. And the general idea I get is that many are out to find faults in this baby.

Many of you know of Madonna’s stint with acting. She may want to be a good actor, but sadly she isn’t. So I guess she decided to give the other parts of movie-making a chance. The thing is, you won’t hear from me about photography, angles or lightning. Sure, I felt that in some parts the movie was trying a bit too hard to be “good”, as in adding funky angles or shaky camera effects. I get it, Madonna, you are artsy. But what I understood from this movie was that it was made with a whole lot of heart.

It needed to be, seeing as you are partly telling the story of what many deem to be the best love story in the world – the one between the Duke (D’Arcy) and Duchess of Windsor (Riseborough).

I know a bit about it because I have a fascination with European royalty. It’s, after all, a topic filled with such scandalous stories it keeps you wanting more. But when it came to the Duke and Duchess of Windsor, I always felt a great respect. I mean, how can you not when he gave up a crown to be able to be with the woman that he loved?

W.E. is divided into two parts. We follow how the Duke and Duchess of Windsor fall in love. We also follow Wally (Cornish), a young married New York woman that kind of becomes obsessed with their love story. When I saw the trailer, I felt that this dividing was a bit unnecessary, but that might be the part of me that loves costume drama — especially from late Victorian era. After watching the movie, I find the divide good. I will admit, Cornish was lovely as the lonely and depressed trophy wife that was so miserable with her marriage that she needs an outlet, which is how the story of the duchesses comes in to play. Because she is so heartbroken with how her “happy” story turned out, she becomes fascinated with the duchesses’ story. She longs to be loved in that way.

I have nothing bad to say about this movie, I really did like it. The parts where NY and Cornish come in to play are grey and a bit dark. Then the parts concerning the duchesses are colorful and loud. I really liked the contrast between the two worlds.

Madonna did one heck of a job picking her actors. I felt that everybody fit their roles perfectly – my eyes are especially drawn towards Riseborough, who was divine as the Duchess of Windsor. As she played the Duchess from her 20s all the way to her 70s, she kind of stole the show.