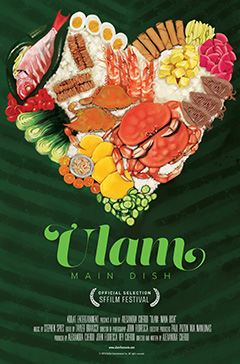 Filipino food – with its many regional cuisines and hybrid flavors— is rarely recognized outside of Fil-Am communities in the United States, aside from rare mentions of lumpia (spring rolls) and (Philippine, not Mexican) adobo. Over three years, director Alexandra Cuerdo focused her documentary Ulam (which translates to “main dish” in Tagalog) on several Filipino-American chefs and restaurant owners working to make Philippine cuisine better known and appreciated. This documentary engages us with great personalities, who are knowledgeable and authentic to their own experiences. Cuerdo centers on New York and Los Angeles, with brief mention of one chef originally from the predominantly Filipino area of Daly City/South San Francisco.

Personal aside: As a San Francisco Bay Area half-Pinay who grew up with many visits to relatives in the region, I must say that the movie would have been very different if it had expanded its scope to the Bay. It would have also been harder to select subjects from the greater number of choices! In comparison, one restaurant owner, Nicole Ponseca, recalls a few turo-turo restaurants (where customers pick food from hot trays) that briefly existed around her New York City neighborhood. We have quite a few turo-turo places here, but also an increasing number of white-tablecloth places, as well as young experimental chefs growing in popularity with food trucks and pop-ups.

Anchoring the film in hotspots like New York and Los Angeles, and featuring mainly younger chefs who incorporate fusion and/or gourmet techniques, shows that their shared aim is acclaim for Filipino food from the wider culinary world. However, they all agree on this: their food must win over the diaspora first. Each set of interviewees has their own stories of how they survived in the demanding and volatile restaurant business, and of how they fell into – or defiantly decided to begin—  the Pinoy restaurant life. The majority were advised by industry insiders that Filipino food wouldn’t sell! Yet these chefs and owners gained the success to last.

Ulam is Cuerdo’s first documentary feature. It is made with much love and care, shot with solid style by John Floresca, but the documentary could have been tighter and stronger. For instance, during one scene, they needed to explain dinuguan (blood stew) and especially balut (chicken embryo in the shell) better for audience members unfamiliar with these foods. The latter was only explained via flash animation, and no spoken or written words to describe the dish! Editor Tayler Braasch also picked out various quotes to emphasize on screen with superimposed text. This technique was mildly acceptable for the opening sequence, though its rhythm gave the sequence more of an indie trailer sensation. However, the second reappearance of the technique seemed like a patch to stretch scant footage. If they intended to give a “full-circle” feel near the conclusion, the timing could have been executed with more grace. Yet do not let these minor flaws discourage you from seeing the amazing food and endearing people of Ulam.

Food is the entry-point for talking about family, about culture, and about defining oneself; individuality separating and intertwining with community. Filipinos and Fil-Ams can debate whether Filipino cuisine actually needs mainstream recognition, if we need to toil this hard for some measure of “validation” of an often-ignored people. What would greater awareness accomplish? Is it worth the possibility that outsiders (not counting those who put in the hours and research with respect, like Dominican-American chef Miguel Trinidad in this film) can claim to “elevate” kare-kare or sinigang like some do with other Asian or “exotic” dishes?  What is the price of making our food more marketable to the mainstream? What could be lost when chefs decide to “innovate,” to blend and depart from tradition? Can members of a hybrid diaspora choose to represent themselves with hybrid food?

What cannot be questioned is that everyone featured worked night and day to craft their cooking and their selves. They seek not to dilute the culture, but to be as true as possible to both Filipino food as well as their own history and resources. Their work, and Cuerdo’s, encourages viewers not just to eat Filipino food, but to appreciate the Filipinos who bring it to the table.