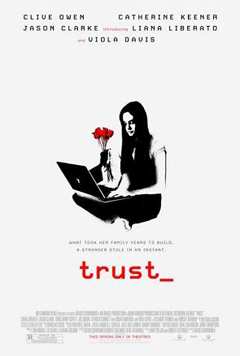 Premiered during the 2010 Toronto International Film Festival, Trust is an American drama-thriller film directed by David Schwimmer (Friends) and tells the story of a girl meeting an online sexual predator and the consequences that it brings to the girl and her family.

In Trust, we see Annie (Liberato) chatting with her online boyfriend Charlie (Coffey), aged 16. As they chat more often via IM programs, his actual age is revealed to be 20, and a few days later he says he’s 25. By the time they meet in real life at a mall, Charlie is actually in his mid-thirties. Despite lying about his age, Annie likes him. They end up going on a date and then, Charlie gets to nail his prey.

A few days later, her parents Will (Owen) and Lynn (Keener) learn about her daughter being a rape victim and the devastation starts to develop not only for Annie, but her parents as well – Annie’s father grows a kind of rage he has never experienced in his life towards Charlie and child molesters.

When you think of David Schwimmer, you instantly think of Ross Geller, easily the least amusing character from Friends by a long shot. Taking that in account, it would be easy to not take him seriously as a director. And on his second chance as a film director – he debuted with Run Fatboy Run, he goes and tackles the uncomfortable subject of rape. But Schwimmer is an activist in the field of rape awareness and with Trust, he has pulled off a great film with strong performances out of Liana Liberato, Catherine Keener and Clive Owen.

Annie’s parents react differently to their daughter’s problem, despite being disgusted and torn by it. Keener’s character is kind and loving towards her daughter, but still not enough for Annie. Meanwhile, Clive Owen’s character is on “I’m gonna hunt him and then I’m gonna fucking kill him” mode and gives a very strong performance as a father who becomes hellbent on revenge, and obsesses heavily on the FBI investigation against Charlie rather than caring about his daughter. Liana Liberato is a pleasant revelation playing a naive teenage girl who shows why rape is a complicated subject with her character going from naiveness to the point of acccepting the truth about Charlie with the help of a psychiatrist, played by Viola Davis.

Sure it might be questionable to see teenagers like Annie being very naive in today’s world. Unfortunately, there are people out there who are just like Annie or even worse. There might be some plot holes to be noticed and questions to be asked – why Annie still went out with Charlie despite his lies, the FBI’s way of investigation, just to cite a couple of examples. And meeting people online can be either great or dangerous for teenagers, but it all comes down to using education and common sense for that. And the first 20 minutes seems worthy of reality series To Catch A Predator. The film takes off once Charlie and Annie meet.

Trust can be compared to Hard Candy since both films involve the same type of villain, but Schwimmer’s film deals with the effects of the crime rather than seeing the bad guy getting the Saw treatment. It’s worth the watch due to the acting, the message it sends and the devastation that the characters go through.