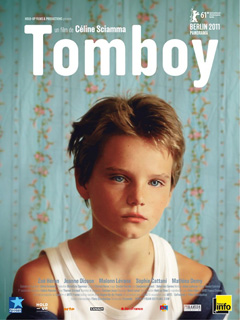 When we posted the trailer for Tomboy, I had no idea that it had been recently released on DVD in France. So I took some time and got myself a copy to brush up on my French.

Tomboy tells the story of 10-year-old Laure (Héran), whose family has recently moved to a new neighborhood. It isn’t too long before Laure meets Lisa (Disson), and introduces herself as Michael.

“Michael” meets the other boys in the neighborhood. As he waits around, he watches them play football/soccer and learns boy mannerisms like taking off the shirt or spitting. Lisa finds Michael oddly interesting, he isn’t like the other boys she knows and we all know it smells like trouble.

At home, Michael goes back to being Laure, big sister of Jeanne (Lévana) — who, to be honest, is the cutest thing ever. Laure’s relationship with her sister is something out of this world. Yes, they are, for the most part, ordinary sisters — they spend time together, one looks after the other, they joke around. However, their relationship escalates to a whole other level when Laure is about to get found out by Lisa.

Let’s not talk about the implications of Laure not telling Lisa that she’s not a boy. Those are grown up issues children wouldn’t be aware of. When Lisa comes to look for Michael at Laure’s home, and little sister Jeanne opens the door, she covers up for her sister without needing to know why. She then waits for her sister to come back. Instead of talking to their mom about it, little Jeanne takes her big sister and tells her about the situation.

Zoé Héran is wonderful in this. Her performance is charmingly awkward when she’s pretending to be a boy, when she smiles and stuffs her modified bathing suit with plastiline. She manages to make us care when she’s Laure. We worry for her thinking about the time she gets found out, and we want to give her a big hug when she does. She’s strong, yet so vulnerable.

It is the most heartbreaking when all the boys chase her down in a mob-like fashion, catch her and make her even more vulnerable — as if she could be any more transparent than being found out for being Michael. Luckily, the ending is not so sad after all.

Overall, Tomboy is a significant piece of cinema in which we explore the mind of a ten-year-old with transgender interests. This film won’t only be an LGBT audience favorite, but also be of interest to the open public if they’re willing to give it a try and go beyond subtitles. The people that need this type of film the most are almost always the ones who never get to see them.