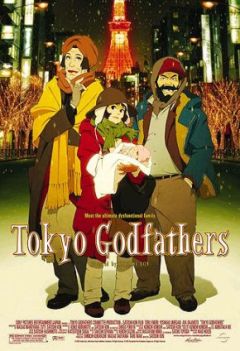 Life is a funny set of coincidences. Before you realize what’s happened to your life, you’ve found people who in the same moment they fulfill you break your heart. Such is the life of three homeless people living in Tokyo: Gin, a man living in the shadows of his past, Hana, a transwoman who wants nothing more than to give all the love she’s stored up in her heart to someone who’ll love her back, and Miyuki, a runaway with a secret that keeps her angry and closed off to even the smallest signs of affection.

On Christmas Eve in Tokyo, the lives of these three impoverished people get up-rooted when they discover a crying baby on their daily dumpster dive. While Gin sees a chance at some form of redemption and Miyuki sees nothing but a thorn in her side, Hana instantly feels the need to protect and nurture.

Gin’s sense of patriarchal duty leads him to demand that Hana give the child over to the police. However, Hana’s instantaneous love for the child pushes her for something more substantial, something with more meaning – she insists that they find the child’s mother. Miyuki, meanwhile, is just sick of always feeling like she’s the leftovers of two adults’ unsorted tribulations, a remnant of somebody else’s life. With nothing more than a scrap of evidence leading them to their desired destination, whatever that may really be, the three “godfathers” set off on a Tokyo adventure that’s equal parts rescue and self-revelation.

While Tokyo Godfathers isn’t necessarily the most incredible anime to come out of the Mecca of animated storytelling, it does consider subjects that many live action films dare not touch: transexuality, a father’s failures, and a runaway’s demons. However, where this film falters is in attempting to tackle all three of these elements at the same time.

The pace of the film is breakneck, to the point where anyone not fully invested in the lives of the people on screen may find the chaos not only underwhelming, but frustratingly difficult to follow. Satoshi-san is one of the most forward thinking artists of the genre, creating art that warps the senses and forces the viewer to absorb the emotion in every frame.

For the record, he’s also one of my favorite directors, creating the mind distorting universe of Paprika and the heartache and self-loathing of Paranoia Agent. As far as the film’s direction and story, you can literally reach out and touch Satoshi-san’s influence. However, his cerebral take on filmmaking seems to shadow the heart of the film, which there is a great deal of. The tenderness of some of the sequences literally squeezes the anguish right out of you. But by the time you reach the end, you’re left wondering exactly what you were supposed to take away from it.

In the end, Tokyo Godfathers is another piece of visual and conceptual artistry, but the depth that Satoshi-san wants you to reach in order to connect every aspect of the film may be a bit too far for some to grasp for.