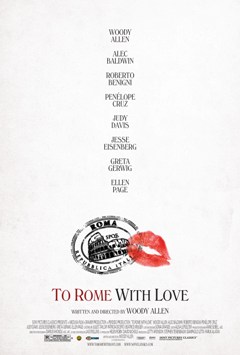 After the success of Midnight in Paris, Woody Allen follows it up with To Rome With Love, a film that follows four separate story lines with different themes which don’t intersect with each other, but the one thing in common they have is that it all takes place in Rome, Italy.

The first storyline begins when Hayley (Pill) and Michelangelo (Parenti) fall in love, which leads to a big reunion with their respective parents. When Jerry (Allen), a retired Opera director and Hayley’s father, discovers that his daughter’s future father-in-law (Armiliato) can actually sing, he does anything he can to convince the mortician to start a singing career on the stage.

The second storyline deals with a love triangle, as young architect Jack (Eisenberg), who lives with his longtime girlfriend Sally (Gerwig), falls madly in love with Sally’s best friend Monica (Page) despite the advice of fellow architect John (Baldwin), who warns him not to abandon Sally for her flashy actress friend.

The third storyline features Antonio (Tiberi) and Milly (Mastronardi), a recently married Italian couple who exchange their provincial life for the bright city of Rome. Their relationship is put to test when both get separated by accident, as Antonio ends up with high-class hooker Anna (Cruz) and Milly ends up meeting one of her favorite actors (Albanese) she always had a crush on.

The fourth and final storyline revolves around Leopoldo (Benigni), a dull clerk who suddenly becomes Italy’s most famous person, with paparazzis and reporters trailing every step he makes and wanting to know every single detail about his life.

I don’t like to say this, but I believe that To Rome with Love doesn’t make Rome feel as magical or exciting to visit as Paris did in last year’s Allen film, or Barcelona (and Oviedo) as seen in Vicky Cristina Barcelona. As far as the story lines are concerned, two of them work very well, one had a good payoff by the end, and the other was all-around pretty weak.

The best segment was easily the one involving Jerry’s quest to make a star out of the mortician. It was witty, funny, and overall entertaining thanks to the entire cast involved, especially Allen with his sharp timing and delivery. Jerry succeeds in getting Michelangelo’s dad to sing, but the way it happens is downright hilarious.

The other segment that worked very well was Leopoldo’s story line. Absurdly funny, but it works thanks to the connection to Roberto Benigni’s life. Much Like Leopoldo’s sudden rise to fame (and eventual decline), Benigni was on top of the world thanks to Life is Beautiful, but people stopped caring about him a few years later. Benigni’s performance is restrained and poignant as Leopoldo deals with fame and everything that comes with it.

While the segment regarding Antonio and Milly was hit and miss, it did have a nice resolution and ending despite the paths both characters took. Penelope Cruz made the entire story line watchable, which is something I can’t say for the love triangle story line. That one was messy, starting from how confusing Baldwin’s character was displayed.

At first, John meets Jack and they go to Jack’s place to drink coffee. Sally gets to know him, but when Monica appears into their lives, John somehow becomes a ghostly presence only visible to Jack. While Jack can be seen as John’s younger version, the love triangle was badly written, dragged the entire film when it showed up, and it was boring despite John’s funny one-liners.

By the end of the film, I was wishing that To Rome with Love should have been only a 90-minute version of Jerry’s storyline instead of watching all four story lines in it. Exploring Jerry and the characters from that storyline with more time would have been interesting and fun.