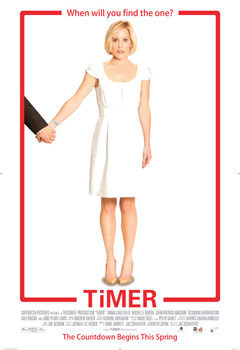 First, let me get this out of the way. Ever since I grew up and re-watched Buffy the Vampire Slayer, I’ve been an Anya fangirl… so I watch anything I can run into that has Emma Caulfield in it.

TiMER is an unusual romantic dramedy that mixes in a little sci-fi. The premise is this: in an alternate universe, they’ve created a biotechnological clock that you attach to your wrist that will activate and countdown to the day you will meet your soulmate.

And we meet Oona (Caulfield), an orthodontist whose countdown hasn’t even started because her soulmate hasn’t activated his — that’s another catch. Oona and her stepsister Steph (Borth) have effed up clocks, but while Oona wonders and worries about meeting the one, Steph has a thing for sleeping around with people she knows are not the ones.

The concept of TiMER is interesting. Would you get an implant that will let you know when you meet your soulmate? Isn’t that taking half the fun out of falling in love? Or is that taking the burden out of finding the one?

Though I loved watching Caulfield (one almost never gets the chance), everything about the cast seems forgettable. The strongest aspect of TiMER is its concept, but it still fails to escape the constraints of the romantic comedy genre. And I love romantic comedies! Though, the genre lays too much of its success on the actors likability, their chemistry and cast interactions to deliver a memorable flick- Love Actually is probably one of the most successful examples, that has been repeated throughout the years. Sadly, TiMER lacks that.

Good enough for a TV watch? Sure!

Classic? Hmm… maybe not, but if you’re watching other romantic comedies like the ones from *coughAniston+Heiglcough* then stop and watch this one.