Woman in Black, The 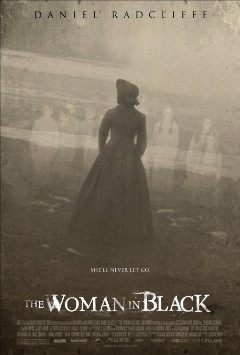 Susan Hill’s novel, The Woman in Black, has been adapted before for television, radio and stage play. The 2012 film adaptation of Hill’s novel has one main draw to lure people into watching the film: it stars Daniel Radcliffe in his first post-Harry Potter film.

The Woman in Black takes place in Edwardian England and follows Arthur Kipps (Radcliffe), a lawyer and single father whose life isn’t going well lately. He’s still dealing with the loss of his wife (Sophie Stuckey) while also facing financial problems and work-related stress from the firm he works at. On top of that, his boss notices Arthur failing at work. However, he gives him one last chance to keep his job.

Kipss is assigned the task of travelling to northern England to sort out the sale of an old house whose owner recently passed away. Later, he finds himself spooked by supernatural things happening there, most notably the apparition of a woman dressed in black (White).

The Woman in Black does a good job at setting the dark and creepy atmosphere during the film, backed up with good production designs and nice camerawork. The film’s atmosphere is built as Arthur explores the house and learns more about the house’s past. The film also includes plenty of tension, chills and deaths — the latter leading the local villagers to want Arthur to leave — the deaths started happening as soon as he showed up. But Arthur will do anything it takes to keep his job, even if it means living at the old house. Despite the hostility from the locals, Arthur befriends Sam Daily (Hinds) and his wife (McTeer).

While watching the film, I was hoping that The Woman in Black ended up being a good film. Unfortunately, Jane Goldman’s screenplay works against the film itself. The plot isn’t all that interesting since its design ends up being more about the scares (which are hit and miss) and the creepy atmosphere rather than a well executed story with interesting details. Along with the typical clichés from horror movies, there are also moments in which nothing happens, making the film boring to watch as well as making it hard to care for Arthur.

Despite the screenplay, Daniel Radcliffe carried the film alright. I’m sure that the idea of watching Radcliffe playing a young father might feel awkward for most people, but it didn’t look as bad as the epilogue from Deathly Hallows Part 2. On the other hand, Ciaran Hinds and Janet McTeer were pretty good in their roles. Hinds had a charming presence and some of the film’s best moments, including being paired with Radcliffe. McTeer provided some energy to the film when her character gets posessed during a couple of scenes, useful to advance the story.

In the end, The Woman in Black could have been better to watch with a polished and straightforward screenplay. While it isn’t a bad film by any means, it’s also not a groundbreaking film for the horror genre or a stellar film for Daniel Radcliffe’s career.