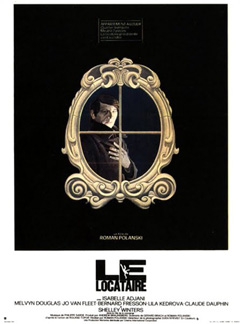 After crafting the masterpiece that was Chinatown, Roman Polanski returned to the psychological thrillers that we all love so much with The Tenant.

Director-writer Polanski stars as Trelkovsky, a shy man who rents a room in an old apartment in which the previous tenant committed suicide. As time goes by, he finds himself dealing with constant complaints from his neighbors about noises at night, deepening his suspicion that they are conspiring against him. The longer he lives there, the more mentally unstable he gets, and the clearer his obsession with Simone’s death and his neighbors supposed plot to kill him becomes.

The Tenant is a bit of a step down in the “apartment trilogy” considering how magnificent both Rosemary’s Baby and Repulsion are, and it’s hard not to compare the three given their stylistic and thematic similarities. It’s impossible to deny that Polanski’s genius at exploring characters who are losing their composure — sexual abuse, fantasy, and repression in Repulsion, fear of persecution and death in The Pianist, mad and devolving parents in Carnage, etc – and this further enforces that.

Roman Polanski does an equally fine job both behind and in front of the camera in The Tenant. He’s a good actor, and while it may not be award-worthy work, it certainly gets the job done. He even surprised me a few times once the true bouts of insanity started kicking in in the latter half. His voice cracks and shakes, he throws on wild outfits, and everything around him seems to startle him. He’s no Deneuve or Farrow, but Polanski in a wig might have even made Hitchcock gone for an auburn haired man in drag instead of his usual blondes.

The Tenant is at its best when it focuses on making the viewer as uncomfortable as possible. The film utilizes both sound and silence expertly at times along with some fluid camera work to further showcase the lead character’s mental breakdown. Much like Rosemary’s Baby, there’s noticeable focus on the idea that those who surround you can and will conspire against you. There are plenty of really marvelously executed scenes, but not a single one of them is quite like the finale that Polanski presents here. You might find it a little bit predictable, but there’s hardly any way you can call it anything other than impressive.

The weaker segments of the film come in when Polanski’s character is dealing with the average politics of apartment life in a relatively foreign land. Sure, a lot of it is tied into the strange aspects of the film, but plenty of it is also pretty unnecessary and sort of grating in a two hour film. And yet another thing that really bogged this down is the dubbing over the French dialogue that becomes painfully distracting at times.

The Tenant doesn’t hold up perfectly against its companions in the apartment trilogy, but it is definitely a solid psychological thriller that will leave many unsettled.