Story of Adèle H., The 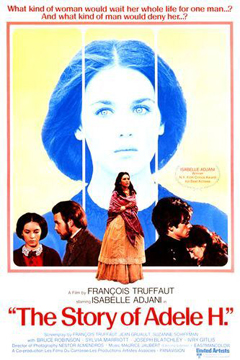 French auteur Francois Truffaut’s well-crafted historical biopic tells the tragic but true story of Adèle Hugo and her unrequited love for a British soldier. Fueled by an unquenchable, blind obsession, Adèle leaves her family’s home in 19th century Guernsey and follows Albert Pinson across the Atlantic to Halifax and then to Barbados under the assumed name Miss Lewly. When Pinson refuses her affections, she becomes entangled in a thick web of self-deception that ultimately leads to her downfall.

Adèle (Adjani) is a character that could have stepped right out of the pages of a gothic novel. Sublime yet forlorn, she wanders the streets of Halifax like a wraith from another time and writes poetic, impassioned letters to her lover (Robinson) until he finally shows up at her door. Given their youth and stunning looks — Robinson recalls a young Alain Delon — it is, at first, difficult to understand Pinson’s coldness when Adèle clings to him and professes her relief at having found him at last.

It is easy to be fooled by Isabelle Adjani’s beauty in the beginning of this film, but we soon learn that Adèle is a coyly deceptive and deeply troubled woman. Underneath Adèle’s ethereal façade lay traces of insanity that push closer and closer to the surface as the narrative unfolds. She loves on a scale so grand, it obliterates everything else around her until she is driven mad by her own delusion.

Her schemes to tie herself to Pinson grow bolder and more outrageous with each of his rejections. She is a self-destructive stalker. When Pinson refuses to marry her, she writes home to her famous father, Les Miserables author Victor Hugo, telling him of their elopement and requesting money for their new life together. The announcement in the Parisian press nearly results in Pinson being court-martialed. When she learns of Pinson’s engagement to a judge’s daughter, Adèle fakes pregnancy, shows up at the judge’s townhouse and extorts money from him by revealing Pinson’s debts and claiming to be his wife. In doing so, she ruins Pinson’s chance for true happiness.

If she can’t have him, no one can.

Truffaut’s choice to direct an entirely one-sided love story is clever. Whether we sympathise with Adèle or not, by letting her narrate (the film is based on the real Adèle Hugo’s diaries), we are forced to give her our attention.

The other characters, including Pinson, are merely peripheral shadows that linger on the edge of the scene. Adèle is a manic constant, and Adjani’s powerful performance makes avoiding being pulled into her absorbing, if uncomfortable, obsession rather difficult. There is nothing else on Earth that matters more to Adèle than her love for Albert Pinson — neither money, her sanity or life itself.

Beautifully shot with an expert, Academy Award-nominated performance by Adjani, The Story of Adèle H. remains a truly haunting and memorable film.