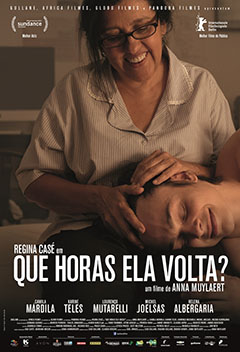 The Lima Film Festival just closed its 19th edition, and I got to watch most of the films in the Fiction Competition Section for jury duty! Since awards have been already given, I can finally write about my favorite one- Brazil’s The Second Mother.

The film follows Val (Casé), a live-in housekeeper who hasn’t seen her daughter, Jessica (Márdila), for the last ten years of her life which she’s spent working at an upscale Sao Paulo family home, where she’s been mostly taking care of Fabinho (Joelsas). Val’s generally stress-free existence is thrown into some chaos when Jessica tells her she’s coming to the city for her university studies, and we’re all forced to examine the invisible class barriers that plague society.

Que Horas Ela Volta? truly belongs to Casé who carries the film with ease, though, one of the main criticisms I’ve seen was that Casé basically plays herself. She’s very likable in here, making a film that might have delved into some of the ugly side of class clashes seem light and enjoyable. Muylaert’s script is simple but layered, as she highlights the friction between mother and daughter (and takes it full circle by the end) with tons of restrained sass.

The flow of the story is natural, as we slowly get to know these women, but also Fabinho’s parents — Barbara (Teles) and Carlos (Mutarelli) — and the cracks of their coexistence. The script hints at something else when Jessica starts bonding with Fabhino and Carlos, tip-toeing one of Latin America’s favorite telenovela plot-points, but luckily avoids it with pathos and certain humor. What one should or shouldn’t do at their bosses’ home? Or how one should address them. It’s particularly tense when Val, unable to wake up on time due to young Fabinho, misses breakfast time, putting Barbara in the strange position of serving breakfast to Jessica. I don’t know about anyone else, but I thought Val was going to lose her job right then.

Even though Muylaert puts Barbara as Jessica’s antagonist, it doesn’t paint her as a complete stuck-up idiot. Barbara cares honestly for Val, or cares enough not to sack her the second she trespasses the trust they’ve established. These complicated relationships keep pushing the film forward until the moment Val breaks loose of social constrains, and elated beyond belief, calls her daughter.

Extra quarter of star for the fabulous Regina Casé.