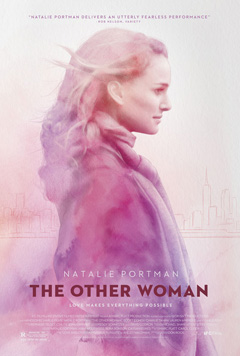 Love and Other Impossible Pursuits (I like this title better) tells the story of Emilia played by Natalie Portman, Jack’s (Cohen) wife and stepmother to his son William (Tahan), from Jack’s previous marriage to Carolyne (Kudrow). Yes, Natalie Portman plays “the other woman” who’s recently lost a child.

The title of The Other Woman is not inviting, especially to women whom upon seeing Portman as such… it’s just downright depressing. Love and Other Impossible Pursuits, however, invites us to sympathize with such a character, try to understand her. Emilia is… not a bad person, she’s not generally an unlikable character, she’s just inexperienced and going through a rough time. She makes a lot of bad decisions, one of them being having an affair with Jack while he was still married to Carolyne, even if… they were on the rocks. But without it, we wouldn’t have a movie, so-

Emilia rationalizes that her relationship with Jack is love, so they have an affair, this in contrast with her relationship with her divorced parents creates an interesting and quite ugly dynamic. This type of contrast also works for her grieving process against her friend Mindy’s grieving process as they both lose children — obviously, in different stages of their lives. There’s also Emilia’s interactions with her stepson, which slowly build up a connection amongst members of a family that’s not… so traditional.

A lot of the load against Portman’s character is taken off by Lisa Kudrow, who plays Carolyne as… a LOUD and a bit neurotic throughout the film, overprotecting her kid, overbearing him, while putting things inside his head. She does, however, have a nice redeeming scene in which, I think, should have been a good setup for the ending, that wasn’t bad… but could have benefit from a more open-ended resolution. Something like she could move on after Carolyne’s observations.

Overall, Love and Other Impossible Pursuits is an interesting film about a not-so-easy-to-love character that relies a lot in its characters interactions, and puts us in the situation of “what would I do in their position…”