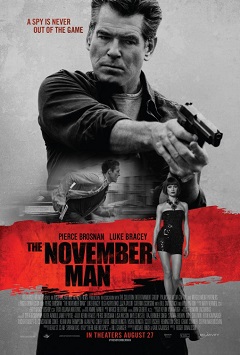 Pierce Brosnan is back as a spy! As Peter Devereaux, an old and tired former CIA agent/problem solver, he has to deal with corrupt CIA agents, corrupt Russian politicians and a former secret agent trainee. Why? Because this time, it gets personal. And nobody messes with James Bond!

Based on the Peter Devereaux novels written by Bill Granger — specifically the There Are No Spies novel — The November Man is another mediocre attempt of the “assassins who come out of retirement for one final mission” genre. It has intense sequences, but they get softened by speeches in the spirit of “being a cold-blooded assassin ruins you for life.” And nobody has time for moral conflicts in a middle of a life or dead situation! If someone is trying to kill you in a spy film, you go and kill them first, right?

The November Man let me down because it has a lot of elements to make it great, but it never really takes off. It has drones, guns, assassins, car chases, beautiful women, awesome cars! But it just doesn’t work. It pretends to be taken seriously, but at times, it just cannot be that way. So it makes you feel a bit confused and frustrated. Another issue with this movie: its women. What happened to them? One gets killed. Another gets injured, gets rushed to the hospital, never to be heard from her again. A so-called ruthless female assassin never gets a final showdown with our hero, so that’s that. And the main female character of this film (Kurylenko), reduced to a basic damsel in distress that needs to be saved, plays the piano and afterwards, in the climax of the film, she writes down and email to The New York Times.

Pierce Brosnan, with his savvy attitude and his still-well oiled killing-machine skills, was rightfully and perfectly cast for the role. Nobody can play a former agent like a former Bond can. He has the lean, devastatingly good-looking profile, with the natural smoothness his Bond had us all accostumed to. Regarding Brosnan, this film actually serves well as a reminder that he can still kick ass in a stylish manner. Despite his best efforts, The November Man is just another predictable and lame spy-thriller flick.

Director Roger Donaldson has created some awesome films in the past, including Dante’s Peak, the volcano movie with Brosnan. So I still cannot figure out why he made this idiotic film. The script was poor, the action sequences weren’t great and the film was a sexist feast. I just don’t get it. Mr. Donaldson and Mr. Brosnan, you can both do better than this.