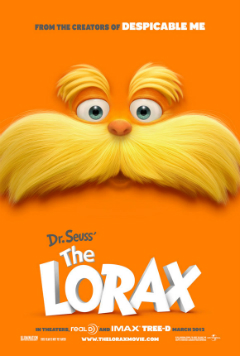 The Lorax‘s story line is fairly simple. A very unlikely hero, living in a city completely made of plastic, arises to save the day. It starts with 12-year-old Ted (Efron), who merely wishes to impress Audrey (Swift), his ideal girl, by finding a real Truffula tree.

Following his grandmother’s advice Ted ventures into the outskirts of the walled city of Thneed Ville to find the Once-Ler (Helms), the only one alive who could tell him about the trees. His involvement in finding these trees brings him to nasty encounters with Mr. O’Hare (Riggle), owner of O’Hare Air. Our villain opposes the idea of trees in Thneed Ville since his whole empire is based upon the absence of fresh air. With trees to produce oxygen for free who would pay for his fabricated fresh air?

Going back and forth between the present events and the tragic story of the Once-Ler, we learn the fate of the trees and we meet The Lorax (DeVito). Although the furry little guardian of the forest is the title character, he seems to play more of a supporting role. I would compare him to a Jiminy Cricket. He comes to personalize the collective conscience.

At its simplest, the movie is very colorful, vibrant and, above all, very comical. It will manage to get some laughs out of you. And if you’re a softie for all things nature, even a few tears in certain scenes. I fell in love with the Once-Ler’s musical numbers, especially ‘How Bad Can I Be’. It was quite chilling.  I also enjoyed Thneed Ville’s final musical number ‘Let it Grow’. That one managed to get me all teary eyed. The musical talent was well chosen, which in itself adds to the good sense of humor of the movie.

All beautiful design, vibrant colors and musical sequences aside, though, the movie feels like propaganda. It’s the ultimate battle between nature preservation and unreserved capitalism. There’s a whole scene dedicated to mocking the present consumerist culture instilled in everything that is North American. That was about 10 minutes of the movie in which two, obviously money hungry, businessmen try convincing Mr. O’Hare to sell bottled fresh air because, according to their studies, people like buying things in bottles.

Unfortunately or fortunately, take it as you will, this has become a repetitive concept in commercial cinema. With this movie, I am reminded of other hits such as Disney/Pixar’s Wall-E and James Cameron’s Avatar, both of which are heavily based on the ‘green’ propaganda. But… aren’t big companies such as Disney and Universal Studios contributors to this mass scale consumerist culture? Just some food for thought.