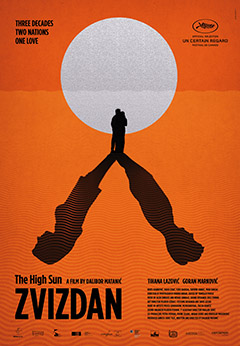 I got the chance to watch Dalibor Matanic’s The High Sun, which was the first Croatian film screened at last year’s Cannes Film Festival since its independence in 1991, as part of the Competition program at this year’s Al Este de Lima Film Festival, which presents a selection of Eastern Europe films. Though Koza took the Press Prize for Best Film (in which I took part in), The High Sun was my favorite of the lot (and took the official juror’s Best Film award), as it deals with the deep-seeded conflict of the country’s separation from what was once Yugoslavia, and their tensions with the Serbs in a three-part story depicting three different love stories featuring the same actors.

The first -and most tragic of the lot- follows the young pair of Jelena (Lazovic) and Ivan (Markovic) right in the middle of the war, as star-crossed lovers. The second one follows Natasa and Ante, whose attraction clashes with the resentment that each of them have of each other’s background ten years after the war. And the last follows Marija and Luka, a year or two before the country joined the EU, and dealing with the reconciliation of people who didn’t seem to find common ground any longer.

Though many have seen Zvizdan as a three-part anthology (and some others were confused as to why Goran Markovic showed up at Tihana Lazovic’s door), I actually saw the film as one fluid story that just happened to have various characters played by the same people— a la Cloud Atlas, which was one of my favorites of 2012, in which each reincarnation had distinct outcomes due to circumstances and choices. The film is beautifully shot, of course, but its biggest anchor are its lead performances; especially Tihana Lazovic (who was also featured on S One Strane, during the festival), who is devastating from start to finish.

The idea of things that cannot be, over and over again through the eras (or in this case, years), as dire as that may be, has always fascinate me as a narrative device— especially in romances. Jelena and Ivan’s story is the hook for the audience to sit through, but the themes are developed as Natasa and Ante reproach each other for what their families and friends have done to other’s loved ones, and culminates with the final visit Luka gives Marija. Not with certainty of something better, but with the hope that there may be change and a future with one another.