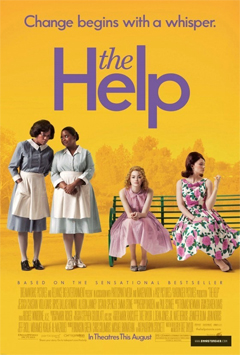 While many films avoid addressing topics of racism and segregation head-on, The Help does a fine job at intimately portraying the lives of both white and black women of the 1960s. Tate Taylor directs and writes this film adaptation of Kathryn Stockett’s novel, about African-American maids working in white households in the city of Jackson, Mississippi.

The film begins by introducing us to Eugenia ‘Skeeter’ Phelan (Stone), a young woman who has recently returned to her hometown Jackson after college, with aspirations of becoming a writer. Going against her mother’s (Janney) hopes of her daughter getting married, she takes a job as a columnist for the local newspaper, dishing out home-cleaning advice, and relying on her friend’s sincere maid, Aibileen Clark (Davis). After realizing just how unjustly her old friends have been treating the help — especially Hilly Holbrook (Howard), who rules the community of women with fear — Skeeter decides to take matters into her own hands. She proposes to interview Aibileen about her experiences being a black maid working for a white woman. With much hesitation, Aibileen agrees and the two begin to secretly meet, resulting in many interviews between the two women.

Meanwhile, Hilly Holbrook has fired her confrontational maid, Minny Jackson (Spencer) without much reason. Her firing served as a part of her plan to get rid of her mother, Missus Walters (Spacek), by sticking her in a nursing home. It isn’t until Minny joins in on Aibileen and Skeeter that even more is revealed about certain events between Hilly and Minny — one that especially provides the women safety in their potentially illegal meetings. Hilly continues to press the other women into promoting her own racist agenda, making sure that Minny is not hired and isolating one of the towns newcomers — Celia Foote (Chastain). It is in Mrs. Foote that Minny finds luck, and is warmly welcomed into the life of a lonely woman who hopes to take care of her home and husband — without his knowledge.

The tales of these women are all interwoven through friendship, rivalry, and especially through Skeeter — who is driven to tell the story of these women by publishing a novel. When she is told she must have at least a dozen maids for these stories to get published, Skeeter relies on Aibileen in hopes that she might soon gain the help she needs to tell everyone’s story.

While at times the pacing felt a bit off and the inclusion of a romantic subplot seemed a bit unnecessary — as did most of the men in this film — The Help was helped along by great dialogue and impeccable casting. I cannot stress the fact that the casting of this film could not have been better.

Viola Davis provides all the heart this film needs, drawing tears from many audience members. And Octavia Spencer dishes out the sass and laughter to balance the film out with ease. Emma Stone breaks out of her straight comedy roles and brings both kindness and emotion to the film, proving to do well in a drama. Jessica Chastain, further proving her talent after a breathtaking performance in The Tree of Life, brings us one of the most refreshing and misunderstood characters of the film. Bryce Dallas Howard’s performance is also extremely notable for her ruthless and malevolent character — although it is a bit disappointing that there was no background established for why she was such a racist and bigoted woman.

Many films dealing with race, unfortunately, steer into dark territories. The Help is one of the many that takes a simple approach to portraying racial imbalances in the sixties. The fact that Skeeter is the savior or tool that the women of color need to rise above racism is disappointing and a major flaw in the film.

While it may not be for everyone, it provides character depth, a fantastic show of acting, and an inspirational story that many will feel for on multiple levels.