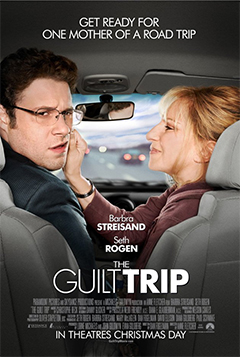 Right in time for the holidays, when families are usually meant to get along and there’s a whole lot of travelling, comes Anne Fletcher’s The Guilt Trip.

Andy Brewster (Rogen) is a scientist with a new cleaning product that he plans on presenting to multiple companies for sale. To do so, he is going on a cross-country road trip. When his overbearing mother (Streisand) reveals to him a past love in a late night chat, he adds an extra stop in San Francisco and invites her along so that she can meet him once again.

The Guilt Trip doesn’t have much interest in straying from the usual comedy involved with road trip movies, filled to the brim with silly pit stops, hitchhiker jokes, and plenty of arguments between characters. Sure, some of the jokes are stale and overdone, but the thought of sitting in a car with my mother listening to the audio book of Jeffrey Eugenides’ Middlesex is uncomfortably amusing enough, so seeing it happen to someone else makes it easy to swallow and fun to watch.

What makes this one different from most is the fact that it focuses on the mother-son relationship, which isn’t a relationship too often looked at. Writer Dan Fogelman drew upon his personal experiences with his mother for the film and it shows in the dialogue between the two. Misunderstandings and secrets kept between the two characters cause a lot of tension throughout, and as the drive goes on there are scenes that might make anyone with a strained relationship with their mother take it to heart.

Barbra Streisand plays the role of the overbearing mother perfectly, and actually reminded me a lot of a few of the older women who raised me — and maybe even myself a bit. Those little neurotic tendencies, a love of eating in bed late at night, and that desire to take care of the ones you care for; it’s these things that make for a good mother figure.

When it comes to Seth Rogen’s work as Streisand’s son, he gives a fine performance that’s far more enjoyable than his usual pothead role. The two go hand in hand very well, and it would be nice to see them work together in the same relationship again.

The Guilt Trip isn’t the best road trip movie, but it’s a fun little film to close off the year with that was more enjoyable and touching than expected.