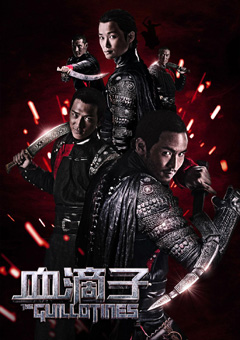 If you’ve ever watched this particular History Channel’s Ancient Discoveries episode [1] or MythBusters [1], you should be, at least, familiar with what a “flying guillotine” is.

In Wai-keung Lau’s vision of The Guillotines, what seemed like it could have been a solid action flick turns into a historical political drama of sorts, focusing on the relationships of its characters more than mindless fighting. And why would it? None of its leads are martial artists, so instead of overflowing The Guillotines with silly wire-fights and stunts, it plays on its other stronger elements.

Set during the Manchurian rule of the Qing Dynasty (1644-1683), the Empire had set up an assassination squad known as the Guillotines, who remained uneducated and as anonymous throughout their lives and the duration of their service, set to kill anyone who dared to oppose the Emperor. One such troublemaker is known as Wolf (Huang), a Jesus-like man, leader of a rebel cult known as the Herders, who labels himself some sort of prophet bearer of truth that had been slowly gaining support from the people, due to the growing discontent towards the Qing Dynasty rulers. With his “rebellious” speech and violent tendencies with lovely quotes such as “If someone kicks us, we chop off his foot,” Wolf is the perfect target for the Qing Empire and its “death squad.” However, in the squad’s first attempt to get him, field commander Leng (Ruan) is rattled by Wolf’s acknowledgment, as well as his prophecy/dream that Leng would be the one to kill him.

There’s also inner turmoil for the squad as chief commander Guar-erjia would have preferred Leng as the next head of the group, instead of his daughter Musen (Lee), who reminds her father that the late Emperor issued an edict that didn’t differentiate between offspring’s genders. However, no one suspects that Leng is struggling with his loyalty between his childhood brothers, Haidu (Yue) and future emperor Qianlong (Zhang), and his Guillotines brothers.

As with many other Chinese productions as of late (Taichi Zero + Taichi Hero come to mind), The Guillotines suffers from over-crowding, which leads to intricate storylines that are connected in essence, but lack the film-editing cohesion, giving us a piece of story here and there and showing us information that relates to each other but never feels like a solid whole. Despite its decent acting – though I’m unsure if it’s Mandarin dubbing – and acting development from Chris Li Yuchun (in her third role), The Guillotines‘ stronger elements are its production value and some story elements. The film has great explosions and stylized violence, especially in a scene featuring Huang Xiaoming in a toned down Tarantino-esque Jesus-fight sequence. And I loved the political aspect of the film, after Qianlong ascends to power and begins prosecuting his own people in favor of Western ideas and technological advancement.

Usually, in movies such as this in which a crappy government is changed for a new one to start over, the coming government is white-washed to contrast with the previous one. However, The Guillotines has a wonderful broken monologue when Leng explains the rebellion to Emperor Qianlong:

Leng: As long as people have food, shelter, and peace, they don’t care for anything else. People only revolt when they have nowhere else to turn. They’re rebelling against injustice and inequality. When everyone is equal, there will be no dissent. That’s when the Golden Age truly begins.
Qianlong: Will that day come?
Leng: Your servant will not live to see the day.

Though marketed as an action flick and clustered with characters and their loose story connections, The Guillotines becomes an interesting look at the dealings of having to start over disguised as mindless entertainment. I’m game. I was a little disappointed Chris Lee didn’t kick as much butt as I thought she would (hers is handed back), but it lends itself for some character build-up.