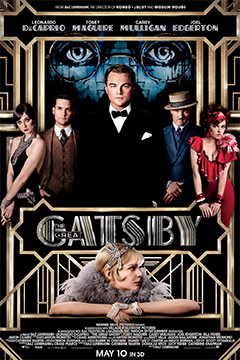 Where many will complain about Fitzgerald’s novel being misplaced in Baz Luhrmann’s hands, The Great Gatsby has some undeniable charm that actually makes it a rather enjoyable watch for all its faults.

Long Island, 1922: Nick Carraway (Maguire) arrives at his new shack in West Egg and soon meets a mysterious millionaire, Jay Gatsby (DiCaprio), known for throwing lavish parties at his mansion. He befriends Gatsby and soon discovers that the man was once and is still in love with Nick’s cousin Daisy (Mulligan), who is now married to Tom Buchanan (Edgerton) and lives across the water in East Egg. It is when Gatsby and Daisy attempt to rekindle an old romance that conflict arises and everyone in their midst is pulled into disaster.

Considering this is Baz Luhrmann, no one should be surprised that he goes all out with the Jazz Age. Not quite so over the top as Strictly Ballroom and Moulin Rouge, but it certainly does go far. The camera is always restless, hustling and bustling to get as much of this story in as possible, the dialogue is often humorous in the first act, and the sets are as beautiful and extravagant as you might expect all throughout. Even the 3D, which is fairly useless most of the time, adds a special little touch and depth to certain details that makes it all the more aesthetically pleasing.

If you’re anything like me, you never wanted to see people from the twenties dancing to will.i.am or Jay-Z and you’ll want to forget it soon after. For all the obnoxious modern music he splices into his film, he actually does utilize a few jazz pieces very well. The most impressive of the bunch is during Leonardo DiCaprio’s introduction as Gatsby as he waltzes in offering Carraway a drink and the scene erupts in Gershwin’s Rhapsody in Blue with a close-up on DiCaprio’s face and fireworks going off all around.

DiCaprio is the shining star of the film and Luhrmann knows it. He’s got the charm and talent to make a perfect Gatsby, and listening to him say “old sport” constantly is a delight. He also hits Gatsby’s darker moments perfectly and descends nicely into madness just as he has done in multiple roles. Much like Moulin Rouge, Luhrmann and Craig Pearce take the same route in grounding Gatsby in a man, Carraway in this case, writing a novel and telling his story through flashbacks. This doesn’t necessarily mean that Tobey Maguire is all that great of an actor, and while he does fine a good portion of the time, he desperately needs to learn when not to overact and avoid yelling.

Thankfully, Baz Luhrmann is far from preoccupied with Nick Carraway, as he prefers to fall into Daisy and Jay’s relationship as much as possible, sometimes ignoring the minor characters a little more than he should. However shallow a human being she might be playing, Carey Mulligan gives Daisy some depth, which makes the chemistry between her and Leo all the better. At times it seems like all subtlety is lost on Luhrmann, emphasizing some of the book’s aspects in the wrong way and almost like all he cares about is romanticizing their love affair a little more than he should be.

This attention to the relationship between Gatsby and Daisy does, however, result in some of the best scenes. Nothing is quite as good as the confrontation, in which every secret is thrown out into the open between Jay, Daisy, Tom, Nick, and Jordan, the last of whom is played by Debicki, who is shamefully underused in the film. It is at that point where Edgerton gets the chance to shine alongside DiCaprio, and the film is at its prime before a slow denouement.

Every party has its highs and lows, and The Great Gatsby is no different. It has its fair share of missed opportunities and flaws, but considering no one will ever make a perfect adaptation of The Great Gatsby, Baz Luhrmann’s often fun yet melancholic film is good enough.