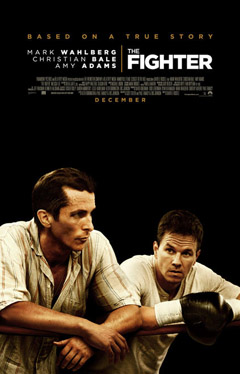 The Fighter tells the story of Micky Ward (Wahlberg) as he struggles to make it as a professional boxer under the care of his crack-addicted brother Dicky (Bale) and his controlling mother Alice (Leo).

The film is gritty with an almost monotone color palette that surrounds this very crude group of people. They are loud, and talk about things like it’s no one’s business but theirs. Bale’s Dicky intimidates you with that crazy look he’s got — also as Batman — but he looks so messed up… it’s only kudos to him as an actor.

The Fighter is well-made, its editing seamlessly mixing the film with footage, make a compelling story about someone that had to go through quite a bit to make it. However, it also angers the viewer because a lot of its adversities originated from the characters themselves… especially Ward’s brother and mother. If it hadn’t been for Charlene (Adams), Ward’s lack of courage to tell his family off may have never come.

Having said that, I gotta give it to the acting in this one. If one had to pick something out of this movie, the acting’s gotta be it. Even Wahlberg, who seems the weakest link, does a decent job. It’s not stretching him any, but he didn’t suck at it. In the case of Amy Adams, it’s good to see her doing something different — like hitting other women in their faces — but if we’re really going to be picking an actress in this, Melissa Leo does pretty amazing, playing a very unlikeable character.

I am really stressing how awful these characters could be, so maybe The Fighter is not for everyone. Unless you really can enjoy a movie for its acting, maybe you should think twice and be in the mood for this one.