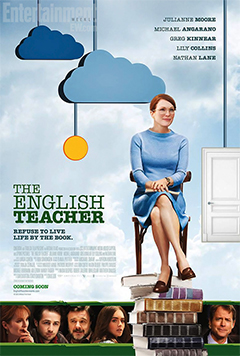 The English Teacher kicks off by introducing us to Linda Sinclair (Moore), a high school teacher whose life has been consumed by literature that has given up on men after being disappointed time and time again. This is all accompanied by a fairly amusing narration by Fiona Shaw that sounds straight out of your favorite period piece.

It takes a visit from Jason Sherwood (Angarano), a former student, to spark up a new passion in her life. His play, one that he failed to get made in New York, has become the center of attention between Linda and drama teacher Carl Kapinas (Lane), and the two push for it to get made at the high school.

As of this point, everything is fun and carefree in Craig Zisk’s debut film. Interactions between Moore, Lane, Jessica Hecht and Norbert Leo Butz (who take on the roles of the school’s principal and vice principal) are wonderful to watch, especially Lane whose presence is almost always a highlight. Having him sing Sondheim’s Putting it Together was a particularly nice touch to lead into a montage of the play’s development.

The moment it all starts coming apart is when things take an unfortunately cliched turn. Linda’s impromptu decision to sleep with Jason leads to hear near demise. It’s the usual story of a career woman not being able to balance work and sex without jealousy or disaster coming in, and it’s disappointing. To add the love/hate triangle between Angarano, Moore, and Lily Collins’ student is a step even further into boring storytelling, even further rustled up when Jason’s father, played by Kinnear, is tossed into the mix.

After all the hell she goes through, Linda is still a woman who manages to take control of a situation and make the best of it. The English Teacher‘s third act redeems itself from an otherwise bland and arguably trite scenario. Julianne Moore’s performance is a convincing one, taking her through the highs of being completely infatuated with something and lows of, well, being put through a sex scandal.

Rather than rely on a tale where the authors intent relies on death and disaster like the film’s play does, The English Teacher works on delivering a tale of acceptance. Acceptance that life doesn’t always reflect fiction. Acceptance that change is beneficial at times. Acceptance of other people regardless of their checkered pasts.

A project like this seems like a comfortable one for a former television director, and Zisk ultimately relies on his actors instead of the average story. Dan and Stacy Chariton have some great lines thrown into their work, a personal favorite being, “In the words of David Mamet – ‘Fuck you,'” but never seem to have a complete grasp on the story, sadly leaving a lot of loose ends. It is thanks to the cast and their good performances that The English Teacher rises above mediocrity to an experience that’s enjoyable enough.