Disappearance of Haruhi Suzumiya, The 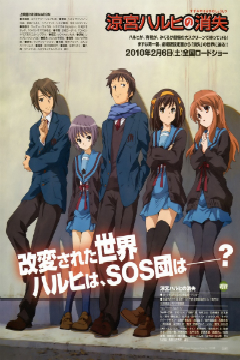 Even those not made to feel end up wanting to.

Gosh did this movie make me want to cry. It was so slow at the beginning, focusing entirely on Kyon-kun. But when the action kicked in, whoa did it kick in with a passion.

The featured movie to the extremely popular anime The Melancholy of Haruhi Suzumiya, lets us learn a little bit more about Kyun-kun and Nagato. We get to see what makes them tick. Nagato in particular and man was it a tear-jerker!

In The Disappearance of Haruhi Suzumiya, Kyon-kun must make a very difficult decision: to stay in the world he lives in or live in a world without Haruhi.

For those of you who haven’t seen the anime, you need to do it before you see the movie. You won’t understand a thing if not. Trust me, that anime might just be one of the best ones you’ll ever see (I should review it for YAM, seeing as I still know the title song and dance… *cough*). It’s Sophie’s World mixed with Alice in Wonderland, but with a huge acid high. It’s confusing, you could not even begin to understand, but it’s highly entertaining.

The Disappearance of Haruhi Suzumiya puts a piece of the puzzle together. We get a story line that stands aside from the main story line. Kyun-kun must restore his world or stay in a new one created out of longing. He needs to be honest with himself, which he is but still so blind. He frustrated me to no end! How can you be so blind? My heart completely went out to Nagato, who could know that a stoic little android could be so sad?

The movie isn’t as fast paced, nor does it have as much action as the anime. The Disappearance of Haruhi Suzumiya is all about the journey and the importance of friendship and love.