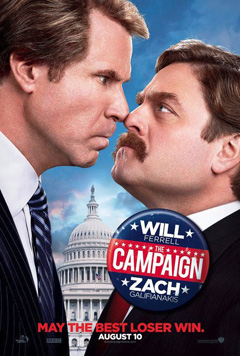 We are two weeks ahead of the American presidential election, and as CNN likes to say, it affects the whole world, but it’s America’s vote. And this is what happens when you’re fighting for the winning ticket to get to the White House, or in the case of The Campaign… Congress.

Democrat candidate Cam Brady (Ferrell) feels like a winner already, he thinks he’s got this election in the bag wtih ever-by-his-side campaign manager, Mitch (Sudeikis). However, things begin going sour after an unfortunately misplaced answering machine message that sinks Brady’s ship with a 16 point nosedive… while running unopposed. The big pockets — Glenn and Wade Motch (Lithgow and Aykroyd) — hoping to put their candidate on top in order to be able to put sweatshop-like factories back in the city, stop backing Brady and put weird underdog Republican candidate Marty Huggins (Galifianakis) in the running.

With the aid of campaign manager Tim (McDermott), it will be a race for votes at any cost…

The Campaign pretty much paints any actual democratic race with broad brushstrokes. Political rivalries, backstabbing, sweet-talking, political idolatry and the media… it’s all there to a tee. The results aren’t all that funny while the actual “campaign” is going on — it’s got a little bit of Anchorman and Ricky Bobby humor going on with Will Ferrell almost having his George W. Bush impersonation coming out of him, eliciting a few chuckles with Galifianakis. In fact, it might be more of Galifianakis’ scenes that may have triggered the most laughs, one of them being the “family confession” at the dinner table. However, most of the bigger laughs in the movie are pretty much included in the trailer [1], which is a given in this day and age of marketing. Sadly.

There’s no groundbreaking or outrageous developments going on, but the film is watchable for a whole full hour with an ending that’s typical Hollywood, almost too happy and neatly tied-up. But how else could you end a movie like this?

The true standout of the movie, despite her lack of screentime or any form of development, has to go to Karen Maruyama who plays Marty’s dad’s maid, Mrs. Yao, who makes a prime surprise introduction with her voice sounding like a black maid out of an old Hollywood picture, only to reveal the reason as to why she talks that way. And damn, was that Maruyama’s Spanish at the end of the film, because that was almost too good of an accent.

Though The Campaign might be highly forgettable for not being brilliant, as well as not sucking enough, it might be the movie to watch to relax those stressed out voters out there who can’t make up their minds. Just remember, forgo the commercials, forgo what they’re telling you, forgo what the others tell you to, and listen to your gut… if you really have to make a choice. The rest is pretty much fanfare. Half a star more for Karen Maruyama’s Mrs. Yao. You’ve been served.